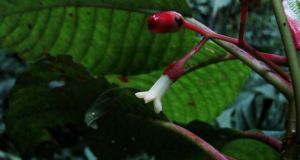 Flowers and fruit on the previously unknown tree found in Cusuco National Park, Honduras, by the team from Trinity College Dublin 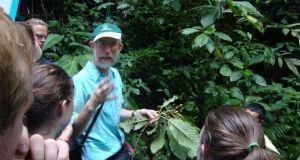 Prof Daniel Kelly describing to his students how to record an unknown plant, not yet realising that he had actually discovered something new

Botanists from Ireland have discovered a previously unknown tree species in Honduras but almost immediately it was put on to a “critically endangered” list of plants at risk of extinction. The tree, a member of the coffee family, was spotted by a team from Trinity College Dublin while on an expedition to the rain forests of Honduras.

It was a “somewhat fortuitous discovery”, said Professor Daniel Kelly, emeritus professor in Trinity’s botany department, who led the party in 2013 to Central America.

He had pitched his tent right next to the 10-metre tall tree, which had cream-coloured flowers and cherry-like fruits.

He wanted to show the students accompanying him how to collect and record a specimen of an unknown plant. Prof Kelly had not realised at the time just how unknown it was.

US experts in Missouri and Hawaii suggested it was related to the coffee tree family, but also confirmed it was an unknown species. “We had struck gold,” Prof Kelly said of the find made in Cusuco National Park.

The plant was duly named Sommera cusucoana, but unfortunately it was found growing less than half a kilometre from a clear-fell logging site.

The International Union for the Conservation of Nature immediately included the “newcomer” in its list of critically endangered species, its ‘red list’ of those threatened with extinction.

The world is in what some scientists describe as a sixth mass extinction of plant and animal species, largely driven by human activity.

“This tree epitomises the plight of so many species today,” Prof Kelly said. It is just one of many plant and animal species that are found in Cusuco and nowhere else.

It would take time to study the plant to see whether its fruits were edible or poisonous, and what chemicals it might produce in its stem or leaves. The plant might be lost before it could even be investigated, he said.

“It likely has unique properties associated with its genetic blueprint, but this will be lost to us if the plant gets cleared out by the chainsaws.

“Exploring the rainforests is not just fascinating, it is really, really urgent,” Prof Kelly said.