That's Maths: The calculation of Easter dates was the principal science of the Christian world in the Middle Ages 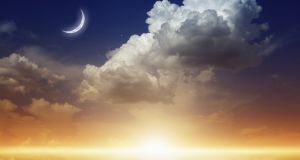 Whatever the weather, St Patrick’s Day occurs on the same date every year. In contrast, Easter springs back and forth in an apparently chaotic manner.

The date on which the Resurrection is celebrated is determined by a complicated convolution of astronomy, mathematics and theology, an algorithm or recipe that fixes the date in accordance with the motions of the sun and moon.

Basically, Easter is the first Sunday after the paschal moon, which is the first full moon on or after the vernal equinox. But the “ecclesiastical” full moon is an idealised event defined mathematically, and may be slightly earlier or later than the astronomical event. Moreover, the ecclesiastical equinox is fixed on March 21st, which does not always accord with the sun crossing the equator.

This year the full moon is on March 23th, and the following Sunday, 10 days from today, is Easter Sunday.

At the first Council of Nicaea in AD 325, it was agreed that Christians should use a common method to establish the date. The church aimed to have Easter celebrated on the same day throughout Christendom.

It was commonly held that the world was created on the vernal equinox, so time should be reckoned from that date and Easter should be celebrated after it. Since the Resurrection is a triumph of light over darkness, it should be linked to the full moon.

The motions of the sun and moon ordered human life and governed the liturgical year. Accurate reckoning of time was vital for human affairs and to establish the dates of important Christian feasts.

Computus – the calculation of Easter dates – was through the Middle Ages the principal science of the Christian world, and Irish scholarship played a prominent role in this science.

Calculations had to reconcile the incommensurate solar and lunar years. A lunar cycle of between 29 and 30 days is not in a simple ratio with the solar year. The marrying of the solar and lunar calendars is a recondite mathematical problem. Indeed, Newton complained that the moon’s motion caused his head to ache. The calculations, which involve ratios and modular arithmetic, might seem simple to a modern mathematician but were computationally challenging for medieval scholars.

The Metonic cycle is based on the observation that 235 lunar months closely approximate 19 solar years. A method developed in Alexandria, based on this cycle, was eventually adopted by the Roman Church. This Alexandrian computus was converted to the Julian calendar by Dionysius Exiguus, the man who introduced the Anno Domini system of dating from the incarnation of Christ.

Irish scholars devised a number of calendrical algorithms for calculating Easter and also the beginning of Lent, the Ascension and other key dates.

They compiled the first comprehensive textbooks on computus. Among the most important are De Ratione Conputandi – On the Reckoning of Computus, a handbook written circa 720.

In the seventh century, two methods of computus were in use in Ireland, one based on an 84-year lunar cycle, the other on a 19-year cycle.

Indeed, a major dispute – the paschal controversy – lasted for more than a century, with accusations of heresy being made, and was finally settled only in 716 when Iona adopted the Alexandrian method then approved by Rome, the system of Dionysius with a 532-year cycle.