Inherited wealth: the genius of George Mendel, the father of genetics 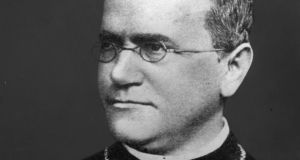 Gregor Johann Mendel (1822-1884), a priest, biologist and botanist, whose work laid the foundation of the study of genetics. Photograph: Hulton Archive/Getty Images

Fail your teacher-qualifying oral exams twice, become a monk, breed peas with the disapproval of your superiors and publish a paper met with “deafening silence” for 34 years. Hardly a promising start for farm boy Gregor Mendel, who discovered the fundamental laws of inheritance.

Breeding farm animals and crops, and indeed pets, by crossing promising parents and selecting the preferred offspring served humanity well, but it did not explain the underlying principles, which intrigued Mendel.

Mendel bred and studied some 28,000 pea plants in what is now Brno, Czech Republic. He published his brilliant deductions from that work in 1866, 150 years ago this year, in the proceedings of the city’s Nature Research Society. The Royal Irish Academy received a copy, but there is no indication anyone paid attention to its German-language contents.

More importantly, Charles Darwin never read the copy sent to him, although the information was critical to understanding the momentous discovery he, and Alfred Russel Wallace, had made of evolution by natural selection. Darwin focused on the great majority of traits for which multiple genes are now known to be involved. Indeed, much of evolution hinges on such traits, but deducing the nature of inheritance from breeding experiments involving them is impractical.

Mendel chose to avoid such traits, and instead concentrated on several genes that individually caused large differences in pea plants. For these traits, instead of the first-generation progeny showing a blending of the relevant characteristic of the two parents, that of just one of the parents appeared. That of the other parent was revealed in a second generation, following self-fertilisation.

Mendel deduced that there were two forms of the determinant gene for each of the traits he studied, with each of the two parents contributing one of the two forms. It took genius to realise that even though one of the genes could be dominant and mask the effects of the other, the gene causing the alternative trait remained intact and would reveal its effects in a predictable manner in later generations.

It was not until 1900, 34 years later, as three groups were starting down the same path, that they revealed Mendel’s earlier discoveries and their significance in understanding how Darwinian evolution worked. Later there was even discussion of whether Mendel’s results were statistically too good, with his gardener reducing the amount of further experiments by “helping” Mendel achieve the ratios he was expecting.

In the late 1920s the Soviet wheat breeder Lysenko distorted his own results and challenged Mendelian genetics. His views were adopted by the communist government, which suppressed rival views, with seriously negative consequences; the policy was dropped in the 1950s.

Ironically we now know that some major conditions such as famine can look like inherited characteristics, but only for a few generations and then they will disappear.

The misuse of genetics

Unfortunately, Lysenko was only one of the people who has misused genetics. Some would seek to prevent the demonstrably safe beneficial use of modern precision genetic tools to boost crop yields, for example.

Unfortunately their influence can have negative personal or environmental consequences. Here, for many years, the Leaving Cert exams only featured components of the life sciences that did not involve evolution or reproduction, except involving plants.

Identification in 1944 of DNA as the hereditary determinant, the correct proposal in 1953 of its structure by James Watson and Francis Crick, and development of ways to manipulate and sequence it in the 1970s are among the key subsequent landmarks. Although many of the pharmaceutical, forensic and other benefits are widely known, with many more to emerge, one aspect is the ability to determine the DNA sequence from certain ancient bones.

Dan Bradley of Trinity College Dublin and David MacHugh of University College Dublin, and their associates, are determining the origins since the last ice age of the waves of migrations of people to this island and their fates, and the origins of cattle. The bigger picture is the emerging detailed knowledge from DNA sequencing of the relationships of all known life on Earth to our common ancestor.

As we again welcome Jim Watson to Ireland this week, students about to sit exams might like to bear in mind the good fortune the founder of genetics, Mendel, had in not being able to proceed with his initial career choice.

Mendel studied traits in peas that appeared in only two discrete forms – for example, a particular flower colour. He started with two pure-breeding strains, one purple-flowered and one white-flowered. Mendel transferred pollen from peas with one colour to fertilise the other. All the progeny plants were purple-flowered, none was white.

In the next generation Mendel allowed these plants to self-fertilise. About one quarter of the resulting progeny were white-flowered. Mendel proposed that this trait was determined by an entity (now called a “gene”) with each parent contributing one copy.

However, one quarter of the offspring would have two white-specifying copies, giving white-flowered plants.

In a brilliant series of further crosses, Mendel showed that the predictions of his model were borne out. Importantly, he showed that characters (purple and white) were not blended in the first cross, as Darwin and others expected – the flowers were not light purple and the white and purple gene variants remained intact.

Mendel must have been an acute observer, carrying out preparatory work before he initiated his study.

He used traits for which single genes had a big effect and also genes that were not linked but on separate chromosomes. This was not simple good luck but the work of a genius.