How leopards get their spots, and other maths problems

What gives a tiger its stripes? Alan Turing had a few ideas 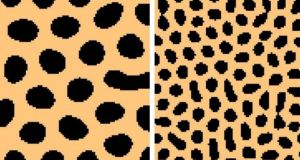 Mathematical models enable us to understand many features of a growing embryo. For example, the patterns of hair colour that give leopards their spots and tigers their stripes can be produced by solving a mathematical equation with different inputs.

The information to form a fully-grown animal is encoded in its DNA, so there is a lot of data in a single cell. But there are only about three billion base pairs in DNA and tens of trillions of cells in the body. So minute details, such as the twists and whorls of a fingerprint, cannot be predetermined. Rather, they emerge during embryonic growth as a result of conditions determined by the DNA, following the basic laws of physics and chemistry.

Alan Turing is famous for cracking the Enigma code during the second World War, but he was a polymath, and worked on many other problems. In 1952, Turing published a paper, The Chemical Basis of Morphogenesis , presenting a mechanism of pattern formation. He developed a theory of how the chemistry in the cell influences factors such as hair colour.

Turing’s model included two chemical processes: reaction, in which chemicals interact to produce different substances; and diffusion, in which local concentrations spread out over time.

Suppose we have two chemicals, A and B, called morphogens, with A triggering hair colouring and B not doing so. Now suppose that A is a catalyst, stimulating production of further morphogens, whereas B suppresses production of them. Thus, A is called an activator and B an inhibitor.

Where A is abundant, the hair is black; where B is dominant, it is white. Now comes Turing’s crucial assumption: the inhibitor B spreads out faster than the activator A. So B fills a circular region surrounding the initial concentration, forming a barrier where concentration of A is reduced. The end result is an isolated spot of black hair where A is plentiful.

What is going on here is a competition between the reaction and diffusion processes. Many reaction-diffusion models have been proposed. The resulting patterns depend on the reaction rates and diffusion coefficients, and a wide range of geometrical patterns of hair colouring can result from this mechanism.

The figure here shows the concentration of chemical A for varying strengths of reaction and diffusion. High values of A are shaded black, as hair colouring in these regions is expected to be black. For strong diffusion, the regions are large and striped like a tiger. For weak diffusion, the black hair is confined to spots, like the coat of a cheetah.

Many patterns can be generated by varying the parameters. Thin stripes, like those on an angel fish, or thick stripes, like those of a zebra, can be generated, and clusters of spots found on a leopard’s coat can be produced. Biological systems are hugely complex, and simple mathematical models are valuable for elucidating key factors and predicting aspects of behaviour.

Traditionally, the life sciences have attracted young people passionate about science, but who may feel uncomfortable with mathematics. In the future, mathematics will play a vital role in biology and maths skills will be essential for students.

Woman left in middle of nowhere after being raped by three Dublin teenagers, court told 18:56
Voting under way in the Dáil to elect the next taoiseach 19:11
Harris signs order to designate coronavirus as a notifiable disease 18:42
Patricia O’Connor murder trial: Jury asked to park ‘shocking’ nature of case outside door 18:37
Teenage girl (16) killed in Cork crash named as Kimberly O’Connor 18:30