Gene-editing: Where do you draw the line?

Crispr has been touted as a potential cure for many diseases, but ethical concerns remain 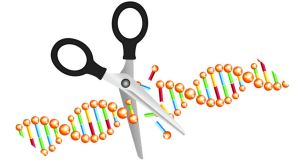 Rarely has a new scientific method created such a ruckus as the Crispr gene-editing technique.

It has been touted as potentially offering a way to cure malaria, HIV, cystic fibrosis and more.

This is not just hype. Scientists at Irish universities are rushing to apply the technique to their own research.

“It’s a bit like we invented the microscope,” says Luke O’Neill, an immunologist at Trinity College Dublin.

Gene-editing was already possible, but not so straightforward. Crispr gives scientists a better lens for studying genetics.

It is an accurate, easy-to-use tool for editing, splicing out or adding genes to plants and animals.

It was discovered just three years ago, and its promise has sucked hundreds of millions of euro into start-ups.

New therapies are being eyed up, along with the potential for improved crops and livestock.

And Google and other investors recently pumped $120 million into genome-editing start-up Editas Medicine.

There are worries too, however. “You can now go into any living system and manipulate genes in a much more efficient, reliable way,’ says O’Neill.

“In essence the sky is the limit, and that’s the concern. There is a massive debate about where you draw the line.”

And then there are the upsides. It has potential in cystic fibrosis, a genetic disease caused by gene mutations.

One of the more common mutations is a deletion of three letters in the DNA code, which leaves lung cells missing a key protein.

This protein helps the lungs to sweep out particles and bugs; without it, cystic fibrosis patients are more prone to infections.

“It allows us to change the sequence or restore it in individual cells,” says molecular biologist Patrick Harrison of University College Cork, who is working to repair disease-causing cystic fibrosis genes.

“We’ve done that in cell culture, as have several other labs around the world.”

The challenge now is to deliver the gene editor into the lungs of patients to make the fix there.

It might be possible to deliver clinical benefits by cumulatively fixing a low percentage of lung cells each time.

However, there are serious hurdles before this technology can be tested in people.

There is a risk of off-target effects: instead of fixing one gene, you might knock another one out by accident, with unintended consequences. It could be used for nontherapeutic reasons, too, maybe by sport cheats.

“You might be able to stick a gene in for a modified muscle protein that builds up muscle mass and tissue. No one has done it yet, but it’s more feasible now,” says O’Neill.

For his lab, the new system saves time. Previously, observing the characteristics of a gene knock-out mouse – a genetically modified mouse in which researchers have inactivated, or “knocked out”, an existing gene by replacing it or disrupting it with an artificial piece of DNA – would have taken a year or more, but this can be done now in two or three months.

“We still don’t know the function of lots of genes in the body,” says O’Neill. “This allows us to see what happens in a cell or organism when we knock a gene out. It will allow us get a parts list.

“Once you know how the engine is built, you can try and fix it when it goes wrong. There’s massive optimism around this.”

Controversy surrounds gene-editing, too. “If you wish to tamper with a sperm or egg or fertilised egg, to give rise to an embryo or baby with certain traits, this is now possible with Crispr,” says O’Neill.

“This brings the classic designer baby a step closer.”

Harrison has yet to meet a scientist who thinks this is a good idea, but unscrupulous individuals might see an easy earner.

Some companies already sell dodgy stem-cell therapies. “The worry is that there will be cowboys out there trying to do this,” says O’Neill.

Almost 500 ethicists, scientists and legal experts from more than 20 countries took part, but no scientists from Ireland. Ireland is especially ill-equipped to deal with ethical conundrums surrounding gene-editing.

An agreement not to proceed due to uncertain risks is often accepted in the early days of a technology, says Dónal Ó Mathúna , a bioethicist at Dublin City University, but this tends to shift after progress is made.

“It may be first used in animals, improved, and then the pressure comes on to use it in people,” he says.

The big concern is gene-editing in sperm or egg or embryos. “There is a huge moral divide between gene therapy that impacts the individual and germ-line therapy that has the potential to go into future generations,” Ó Mathúna says.

For O’Neill, Crispr-Cas9 shows why curiosity-driven research remains critically important, even when practical benefits might be unclear.

“It was a basic, fundamental research question: how bacteria handle invading viruses,” he says. “The application only became obvious after it was figured out.”

Crispr-Cas9 is revolutionary but controversial. Researchers in China reported using it on nonviable human embryos last April, triggering debate among scientists about ethics.

Ireland has little or no regulation on such procedures. “It is highly problematic that Ireland has chosen not to introduce legislation,” says bioethicist Dónal Ó Mathúna at DCU.

“The whole area of assisted reproduction and use of embryos in research is unregulated. The Government has decided to not address this area.”

This is very different from the UK, which has quite a liberal approach to such research but also has mechanisms in place to grant or deny approval.

The Irish Medical Council’s code of ethics bans any experiments on embryos, but it appears that private companies could legally pursue gene-editing of embryos here.

“Every other European country has a public bioethics council except Ireland,” Ó Mathúna says.

“The government shut down the Irish Council for Bioethics, which took away the one public body that was engaging with the public on bioethical issues.” Ó Mathúna runs the Bioethics Ireland website, bioethicsireland.ie.