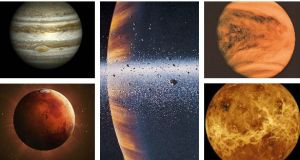 All planets will be low on the southeastern horizon and will line up from left to right (or east to west) with Mercury first then Venus, Saturn, Mars and Jupiter

An astronomical rarity is on the way: a chance to see five planets at once with the waning crescent moon an additional treat.

These are “naked eye” planets visible without the need for telescopes or binoculars, explained president of the Irish Astronomical AssociationTerry Moseley.

This rare opportunity to see the five clustered in the early morning sky arises between January 24th and February 6th, he said. The next chance to see them together will not come again until at least 2023 .

All will be low on the southeastern horizon and will line up from left to right (or east to west) with Mercury first then Venus, Saturn, Mars and Jupiter.

They will be joined by the waning crescent moon from February 1st, said Mr Moseley. 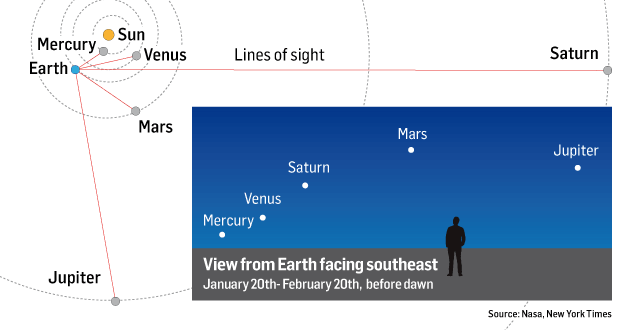 They will appear very low in the southeast, only one or two degrees above the horizon. “You will need a clear view with no houses or hedges in the way. You should start looking from about 45 minutes before sunrise, say about 7.30am,” he said.

Venus will be the brightest of the group and if you look about a hand’s width to the left of Venus and slightly below it you should spot much fainter Mercury. “Use binoculars to find it at first if you have them,” he suggested.

Saturn will be the first to the right of Venus and will appear creamy white compared to the next in line, Mars, which will be reddish.

Jupiter will finish the run and is second brightest of the group.

“Altogether they will span more than half way across the sky,” said Mr Moseley.

The arrival of the thin curve of moon on February 1st will make it “an even more glorious sight”, he added.

Stars will also appear in the line-up, including blue-white Spica between Mars and Jupiter and a reddish Antares below right of Saturn.

The five naked eye planets last clustered together in 2005.