Advances in heart health: ‘I dread to think what would have happened without this’ 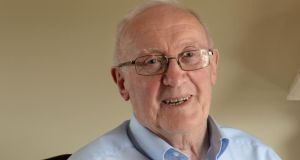 Patrick Glanville at home in Dublin after having a TAVI procedure to replace a valve in his heart. Photograph: Dara Mac Donaill

Older people who need heart valve replacements but are too ill for open heart surgery have a new option – replacement heart valves threaded through their blood vessels in a non-invasive alternative to surgery. Prior to this, people with severely damaged valves who could not have open-heart surgery had no option but palliative care.

“Essentially it’s gone from being a very complicated surgery under general anaesthetic and a long hospital stay to a simple procedure under sedation. Before this you’d be in hospital for weeks and recovering for months, now I expect to see people sitting out eating their dinner that evening and for them to be back home in two or three days,” said Dr Ivan Casserly, consultant cardiologist at the Mater hospital, where more than 150 of these “transformative” procedures have been performed since 2008.

The innovative treatment called transcatheter aortic valve implantation (TAVI) was developed in 2002 and is now provided in five centres around Ireland. Patrick Glanville spoke to The Irish Times two weeks after his procedure.

“I’m stronger every day. I’m 77 now and I’ve had three open-heart surgeries for valve problems since 2002. I was doing all right but then one day it was like someone turned a switch and I just couldn’t breathe.

“They couldn’t do another open surgery but thankfully they could do the TAVI procedure to replace the valve instead and here I am at home. I can’t believe it. I dread to think what would have happened without it,” he said.

His wife, Katherine, said, “You’d be amazed if you had met him two weeks ago; you wouldn’t believe it’s the same person. He’s lucky that he was a candidate for it. As far as the family is concerned, it’s been a lifesaver.”

Dr Casserly described the procedure. “In order to work as a pump, the heart needs to have effective valves. Sometimes the aortic valve can become stiff and inflexible, narrowing the opening that the heart has to pump through, a condition called aortic stenosis.

“If severe, the heart muscle will eventually become tired from pushing blood against the high pressure caused by the narrowing, leading to heart failure. In the short term the valve could be widened using a balloon but it doesn’t solve the problem and the valve needs to be replaced. That requires open-heart surgery but older people who are frail and have other medical problems may not be able for the surgery,” he said.

“The breakthrough was the idea that you could implant a replacement valve through the blood vessels in the groin just like a stent and then insert it over the faulty valve. The technology and the skills followed after that and they’re constantly developing so it’s rapidly becoming more and more successful,” said Dr Casserly.

“We’re talking about very sick and often very old people. People’s priorities change in their 70s and 80s and they don’t want to spend six months recovering from surgery. This approach dramatically reduces recovery time but the outcome depends on what you’re treating,” said Dr Casserly.

“There’s no age limit, the point is to provide an option for people who would otherwise have no treatment and would die from this. We tend to treat older patients who have lots of different problems as well as the valve disease so their outcome depends on the other factors.

“We can’t make people younger but if the valve is their only problem, a person will go from being short of breath after walking a hundred yards to the next day being able to walk the same as a normal person. After years of being unable to do things, they need to build their fitness back but generally they can’t wait to get back to walking about,” he said.

Barbara Moran, clinical nurse specialist on the Mater hospital’s TAVI team, works closely with patients and their families while co-ordinating their assessment and treatment.

“Families express massive relief and appreciation for the technology and skills that can do this. When you see a patient have a part of their heart replaced and be up and about the next day, it’s an eye-opener.

“Before the procedure a lot of patients are depressed or isolated, their lives are so restricted. I can’t overstate the importance in people’s lives of getting back to independence and being able to have a normal life without their heart symptoms,” she said.

“People are naturally anxious in the run-up to it, more so the families. Most of our patients are in their 80s and are usually very happy to be going ahead because they know medicines won’t be able to keep them alive. It’s very gratifying to see people come out the other side and be so well. Older people embrace it because they see it as essentially getting a second chance,” she said.

“To have TAVI with health insurance you have to be unbelievably sick and score a certain number of points on a crude scale. But in the public system these decisions are made by the whole heart team involving surgeons, cardiologists and nurses as well as support from our radiography and radiology colleagues.

“Every patient’s needs are different and older people will tell you themselves what they want. We’ve treated brothers where one came in and said he’d prefer TAVI because he’d seen how it had worked for his brother,” said Dr Casserly.

“We don’t have the data over a long enough time to say that TAVI is as safe and effective as surgery so surgery is still the ‘gold standard’ treatment but what we’re seeing in clinical practice is very encouraging. In the next five or 10 years we expect TAVI will become used for people with moderate risk as well as high risk.

“A surgical valve is cheaper but the hospital care for TAVI is significantly simpler and shorter. Things like having a urine catheter, getting an infection or having a fall while in hospital are huge setbacks for an older person.

“I’m convinced this is highly cost-effective if you take these things into account. We’ll exhaust our allocation of valves for the year in August and we’ll fundraise for the valves for people who need TAVI from September to January. It’s tiring for everybody but it’s worth it because the effect on people’s quality of life is so drastic,” said Dr Casserly. The Mater Foundation will be fundraising through the Great Dublin Bike Ride for the TAVI service. Details can be found at materfoundation.ie