That’s Maths: To celebrate his 100th column, Peter Lynch has written an ode to the number 100 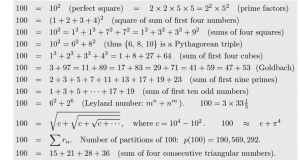 The number 100 has many fascinating properties

The inimitable Indian mathematician Srinivasa Ramanujan had an uncanny ability to remember the properties of numbers. It was said that every positive integer was one of his personal friends.

For any number we choose, many interesting characteristics can be found. I have composed this ode to the number 100. While no literary merit is claimed, the ode highlights some of the many fascinating properties of the number. The figure (right) illustrates the analysis of the number 100.

A Ton of Wonders

The number familiarly known as a ton
Comprises two zeros appended to one.
It holds, in its five score of units, great store
Of marvel and mystery and magic and more.

Pythagoras knew, with sides 6, 8 and 10,
A trigon would have a right angle and then,
The squares of the 6 and the 8 being paired,
Make a century for the hypotenuse squared.

The cubes of the first four whole numbers combine
To total one hundred, and not ninety-nine.
With Goldbach to guide us, a century splits
as a sum of two primes, with a half-dozen fits.

The nine smallest primes up to twenty-and-three
Will sum to precisely a ton, you’ll agree.
Now add all odd numbers from 1 to 19:
A sum of a centum again will be seen.

A number is ‘Leyland’ if m to the n
Plus n to the m gives the number again.
One hundred is such, as we easily shew,
When m equals 6, and n equals 2.

One hundred is thrice thirty-three-and-a-third
With many more forms that are much more absurd:
Take a ton from its square: then the iterate root
Brings you back to one hundred without any doubt.

A ton can be made from irrationals too
And even the powers of transcendents will do:
One hundred is e plus the fourth power of pi
(albeit this estimate’s slightly too high).

And what of partitions? Of sums there are more
than one-ninety million to make up five score.
This number produces, when broken asunder,
A cornucopia of wealth and of wonder.