2015 likely to be the warmest year ever recorded 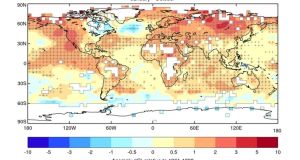 This year is destined for the history books with 2015 likely to be the warmest on record. It is smashing regional records around the globe for the driest year, strongest tropical storms, warmest ocean temperatures and warmest five year period.

The figures published on Wednesday by the World Meteorological Organisation will provide a grim backdrop to the UN COP21 climate conference which gets underway in Paris next Monday.

“This is all bad news for the planet,” said the organisation’s secretary general Michel Jarraud.

The figures are based on data accumulated between January and October from measuring centres around the world. The numbers are so bad already that the organisation is fully confident 2015 will be warmer on average than any year before it.

Symbolic milestones are also being reached with this year’s average temperature likely to reach the one full degree above the pre-industrial era. “It is probable that the 1 degree Celsius threshold will be crossed,” Mr Jarraud said.

Temperature records are highlighted all through the report. Ocean surface temperatures are already ahead of the record high set in 2014.

It will be one of the warmest years on record over land. China is having its warmest year on record as is South America and Asia generally. Africa and Europe are having their second hottest.

The oceans have been absorbing more than 90 per cent of the energy that has accumulated in the climate system and this is reflected in risking sea temperature and sea levels.

The global average sea level in the first half of 2015 was the highest since satellite observations became available in 1993, the Organization said.

The heat penetrates deep into the ocean surface with record high temperatures in the top 700 metres and top 2,000 metres.

The human-induced warming is being accentuated this year as a periodic El Nino ocean warming event is underway in the Pacific Ocean. This continues to gain strength and will add to the overall heating for many months to come, the report said.

The year is littered with exceptional heatwaves as happened in India in May and June. Europe also experienced heatwaves , with July bringing a period of excessive heat from Denmark down to Morocco.

Some regions experienced exceptional rainfall such as the southern US, southeast Europe and parts of Africa.

Drought was a problem for other countries including Central America, the Caribbean, parts of central Europe and Russia.

The desiccated landscape that affected the western US brought with it record numbers of wildfires. There were 400 fires in Alaska during May and then 700 more in July. Washington State suffered its largest fire on record.

The number of tropical storms in the Atlantic and Pacific was around normal but the mix included the strongest hurricane on record, a category five storm with wind speeds of 320km/hr when it made landfall in Mexico in October.

The poles returned contrasting statistics with the Arctic showing considerably reduced ice cover through the year. Antarctica continues to add ice according to the data.

“Greenhouse gas emissions which are causing climate change can be controlled. We have the knowledge and the tools to act. We have a choice, Future generations will not,” he said.