Why we should be wary of Sinn Féin in government 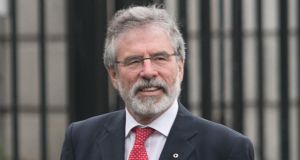 The party faithful are conditioned to accept what the leader says, and indeed don’t care if he was in the IRA or not.

Following the remarkable success of Sinn Féin in the recent local and European contests, and in reasonable anticipation of further gains in the next general election, speculation is already rife on the party’s place in probable coalition groupings. Its untested economic policies (the main basis of its popular appeal) have been constantly criticised by its opponents. But there are other features of the organisation which prospective partners would do well to examine closely, not least its rhetoric and terminology.

The term “republicanism”, never off the lips of Sinn Féin speakers, originally meant, from the 1920s to the 1950s, anti-crown and anti-commonwealth. “A mad republican” was then a common phrase. The usage gradually changed after the formal proclamation in 1949 of the Republic of Ireland as the description of the 26-county State. From the outbreak of the Troubles in the late 1960s, “republican” came to mean a supporter of a united Ireland in general sympathy with the IRA. But for most republicans the armed struggle dimension is no longer a factor since the Belfast Agreement.

Over the years when someone such as Martin McGuinness referred to “republicans and nationalists”, he was presumed to mean Sinn Féin and SDLP followers, respectively. As used today, the phrase suggests “republican” is superior to “nationalist” and, by extension, to common Joe Soaps in parties in the Republic. A feature of Sinn Féin rhetoric is its pervasive air of self-righteousness and sanctimoniousness.

Another peculiarity of Sinn Féin modes of speech is the refusal to accept the legal forms and common usage of “Northern Ireland” and “the Republic of Ireland” as the correct descriptions of the two political entities that comprise the island. Sinn Féiners refer to “the North”, “the North of Ireland”, “up here” and “the Six Counties” but never to “Northern Ireland”. Similarly they use “the South”, “the 26 counties”, “down here” or, if they are really being naughty, “the Free State” but never “the Republic”. In a recent, hour- long interview with Marian Finucane on RTÉ radio, McGuinness employed the usual verbal evasions with remarkable agility in order to avoid giving its proper description to the state of which he has the honour to be Deputy First Minister.

In the tortured theology of Sinn Féin nationalism, accepting and using “Northern Ireland” and “Republic of Ireland” would be to accept partition and, even worse, to compromise and betray “the true republic, as in 1916 established”. Irony of ironies, Sinn Féin played no part at all in Easter 1916! All this juvenile, fantasy-land stuff is an indication of arrested political development on the part of Sinn Féin. And it raises the large question which should be ceaselessly put to Sinn Féin’s leadership – if you can’t bring yourself to describe the State properly, do you really recognise it at all? Are you not still “a slightly constitutional party” as Seán Lemass styled Fianna Fáil in 1928?

Adams has also spoken of popular support for “an historic and inclusive (buzz words!) accommodation between Orange and Green in a new republic”. But this is no more than aspirational waffle – a sentimental fantasy since the heyday of Thomas Davis’s rhetoric in the 1840s. Orange has shown no interest in any “accommodation” with Green, whether in a Home Rule arrangement or in a republic, old or new. If such an agreement had been possible, partition would long since have ceased, and indeed would never have been necessary in the first place.

For all the sophisticated thinking about new structures that lay behind the Belfast Agreement, Sinn Féin remains an old- fashioned anti-partition party at heart, echoing the futile rhetoric of the Anti- Partition League of the 1940s. This view minimises the age-old antagonism between Orange and Green, and emphasises Britain’s central role (eg the 1916 Proclamation – “differences carefully fostered by an alien government”). In this view, Britain created partition and Britain could undo it. According to Sinn Féin, partition institutionalised sectarianism and the ills that flowed from it. But sectarianism flourished long before partition and it was the indifference and neglect of London governments rather than partition itself that lay behind Northern Ireland’s chronic problems.

Perhaps nationalists in general, and not just Sinn Féin, should radically re-examine the assumption that partition was, and remains, an evil in itself, and rather face up to the unpalatable historical truth that some form of partition, rough and ready though it turned out to be, was necessary to deal with the two conflicting nations in Ireland. In the insightful phrase of the late distinguished scholar and commentator Liam de Paor (no West Brit he!), partition was a condition of, rather than a flaw in, Irish independence.

Besides, since the political reforms of the 1970s, and more so since the Belfast Agreement, nationalist criticisms of the evils of partition have been outdated. Of course, from a nationalist viewpoint, it would be “grand” to have a united Ireland as well as (presumably) economically advantageous. But, realistically, it’s farther away than ever, not least because of the polarising Troubles, and most northern nationalists are happy enough with the constitutional status quo.

At this stage in Northern Ireland, surely what is needed most is a long period of peaceful community relations and the slow building of reconciliation. Incredibly, what Sinn Féin is promoting is a referendum on Irish unity, a pointless, regressive and destabilising exercise. Adams said last month, on Morning Ireland on RTÉ radio, that “a strategic plan for Irish unity” will be a red-line condition for any participation in government. A red alert for prospective partners, more like, and the very negation of a peace process.

Together with his frequently expressed admiration for Bobby Sands and for the role of the IRA volunteer in general, this unambiguous statement tells us all we want to know about Adams’s true allegiances. Despite his belated expressions of support for the security forces of the State, he remains true to his “Óglaigh na hÉireann”, the Provisional IRA. If this doesn’t give other party leaders pause, it certainly should.

Elated by their electoral success, Sinn Féin leaders have been stepping up a largely unchallenged version of their recent history. Once upon a time, “revisionist” was their favourite term of abuse but now they are dab hands at revisionism themselves. Political opponents and the media rarely question the party’s presentation of past events, either because they are not sure of their ground or because they fear the moral blackmail of being charged with putting the peace process at risk. “Hit me now with the peace process in me arms.”

The party’s breathtaking revisionism extends to the causes that it now gives for the conflict. IRA culpability, the sectarian dimension and the statistics of responsibility for deaths are ignored and “the armed struggle” becomes a great campaign for equality and civil rights – which, in fact, were conceded quite early on. And let us not forget that what is now paraded as “peace-making” was actually the strategy of maximising Sinn Féin’s strength while using IRA decommissioning as a bargaining tool.

IRA atrocities are, they say, a matter for regret but they are presented as an inevitable part of conflict and seem to happen almost as impersonal forces. Euphemisms abound. In his long interview with Marian Finucane in May, McGuinness spoke of the “loss” of Lord Mountbatten (she did not demur at this) as if it had been a regrettable oversight.

Another frequent Sinn Féin line is the attribution of blame for obstacles and setbacks to British “securocrats” behind the scenes. Who are these faceless, sinister forces? Why are their machinations allowed to threaten peace? Why do they want to destroy the peace process? No answers are sought or given for these questions.

Sinn Féin may or may not believe its own propaganda. But it behoves opponents to subject it to close scrutiny. If prospective coalition partners ignore it, they do so at their peril – indeed at our peril.

John A. Murphy is Emeritus Professor of Irish History at University College Cork and a former Independent member of Seanad Éireann.