Voter turnout higher so far than in last referendum 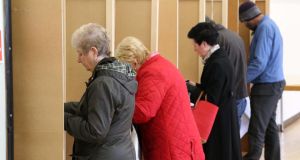 Turnout in the world’s first referendum on same sex marriage and on the age of candidates for the presidency is reported to be brisk.

Some urban areas estimated that 20 per cent of the electorate have cast their vote but voting is slower in many rural areas.

Ireland is the first country to vote on marriage equality and in Dublin some turnout was seen as quite high for lunchtime.

In Sandymount on the capital’s southside around 12 noon an estimated 20 per cent of the electorate had voted, mixed in age but pre-dominantly older voters in the Dublin South-East constituency.

In Darndale on the city’s northside polling was quiet in the Dublin North Central constituency. This constituency is consistently in the top three for voter turnout at both general and local elections and referendums.

In Castletownbere in Cork South West voting was described as a little bit better than in previous referendums but not as high as in the general election.

The rural town with some 1,200 voters has a large number of expatriate residents, who are ineligible to vote because they are not citizens.

In parts of Galway city turnout was described as brisk with one station in the city centre reporting a 16 per cent turnout.

In Donegal South-West polling has been described as slow.

Turnout in the last referendum on the abolition of the Seanad was less than 40 per cent.

Returning officers expect voting to increase significantly by tea-time with most people in employment expected to vote between 7pm and 10pm when polling finishes.

In a number of polling stations in Galway city queues were reported before polling opened at 7am. In city areas of Cork polling hit 12 per cent by 1pm.

Across the country in Mayo voting was estimated at 17 per cent in Westport by lunchtime and about 10 per cent or 11 per cent in Castlebar.

In Letterkenny voting was estimated at 13 per cent while in parts of Co Leitrim, with the State’s smallest population, voting had hit 17 per cent.

Interest in Carlow-Kilkenny where a byelection is also underway to replace EU Commissioner Phil Hogan is also high, with some polling stations reporting turnouts of between 16 per cent and 17 per cent.