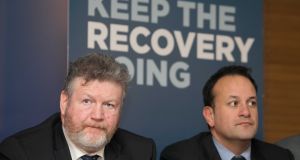 Minister for Children James Reilly (left) and Minister for Health Leo Varadkar during an address to Fine Gael candidates and supporters by Taoiseach Enda Kenny TD at the Alexander Hotel, Dublin, on Wednesday. Photograph: Gareth Chaney/Collins

Minister for Health Leo Varadkar has confirmed he became aware of allegations of abuse at a foster home in late 2014.

Mr Varadkar said he received a letter from a whistleblower detailing sex abuse allegations at the foster care home in the south east.

He said he followed up with a meeting at an official level with Minister of State Kathleen Lynch and one of the whistleblowers in early 2015.

“That was the most important thing. Anything else was about investigating what happened in the past. Two investigations had already occurred or were occurring at that stage.”

The Dáil’s Public Accounts Committee (PAC) has heard how a young woman, who has an intellectual disability and was left for almost 20 years in a foster home which was the subject of serious concerns over sexual abuse.

’Grace’ had been placed there in 1989 and remained there until 2009, despite the fact that other foster children had been removed by 1996.

The Government has agreed in principle to establish a Commission of Investigation into the allegations.

Mr Varadkar said he has been informed by the Health Service Executive director general Tony O’Brien that the key people involved in keeping ‘Grace’ in the home no longer work in the public service.

“There are people who may have had a role on other levels who have roles in Tulsa and the HSE as well. Anybody in every walk of life should reflect on the decisions they make and consider what the right thing to do is but at the same time to not forget these are still allegations and allegations have to be properly investigated,” he said.

“People have a right to a fair hearing.”

Mr Varadkar said people must be held accountable but it should not be the media or politicians who make that judgement.

Questions raised over Ireland v Italy fixture due to Coronavirus

Fundraiser to assist family of girl (16) killed in Cork crash has raised €17,000 13:59
School kids get the measure of trees and their benefits 13:56
Varadkar says Sinn Féin rallies a ‘campaign of intimidation and bullying’ 13:38
Coronavirus: Irish citizens advised not to travel to Italy’s affected areas 13:34
Boy injured after collision with school window settles action for €45,000 13:30