Harry McGee reports from the Count Centre at Dublin Castle 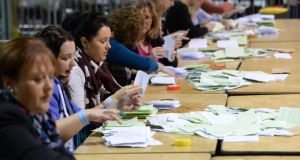 Counting of votes for two referendums is taking place all over the country today, including at the RDS in Dublin. Photograph: Dara Mac Dónaill/The Irish Times

It’s very early days in counting in the referendums on the abolition of Seanad Eireann and on the Court of Civil Appeal. Understandably, all of the tallies have been focusing on the star item - the scrapping of the Upper House.

The tallies around the country are sporadic and uneven but there is an unmistakable pattern emerging. What is certain is it’s not going to be a foregone conclusion and we may have a very tight outcome, with a massive upset a possibility.

Throughout the campaign the polls maintained a consistent gap between Yes and No, suggesting that the campaign for the retention of the Seanad was not getting sufficient traction. In previous polls, when there was a swing there was a noticeable closing in that gap in the final weeks and days.

There has been a tendency of polls to underestimate the No vote - that was also apparent in the Children’s Referendum last year, although the final poll occurred some three weeks before polling.

The evidence from the very early tallies are that we may have a No vote in Dublin and in the major urban areas, with it being a little closer in rural constituencies, but not trending decisively towards a Yes vote.

In a historical context, it may shape up to be very close to the knife edge result of the divorce referendum two decades ago, with both sides separated by a matter of only thousands of votes from a poll of well over one million.

There is some evidence of slight trends to Yes in rural constituencies like Wicklow, Mayo and Tipperary South where after a quarter of the boxes tallied it was Yes 52 per cent and No 48 per cent. In Sligo, a similar three to four point gap for the Yes side is emerging.

In Meath East, the early trend in urban centres such as Ashbourne is veering towards No, as are urban areas of Cork South Central and Cork North Central.

Alex White, on RTE in the past few minutes, has said the vote in Dublin is trending No - he instanced a 55 per cent No vote in his own constituency of Dublin South.

The implication of that is that Dublin may decide the referendum - if it is a close Yes outside the capital, a strong vote in the capital may be decisive.

Politically, there are many implications if there is a shock result. The first will be that it will be a big personal setback for Taoiseach Enda Kenny, who personified the drive to abolish the second house.

There will be questions about how much a factor was his decision not to participate in a debate with Fianna Fáil leader Micheal Martin. It will also leave the democratic revolution in tatters - two huge referendum setbacks on two of the biggest changes that were promised - a parliamentary inquiry system and the scrapping of Seanad Eireann.