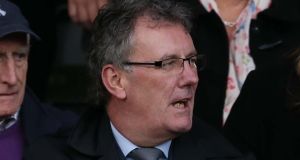 UUP leader Mike Nesbitt: the price of internal peace was his party dropping to just 13 seats in the Northern Assembly. Photograph: Inpho/Presseye/William Cherry

The Ulster Unionist Party met for its annual conference at the Ramada Hotel in south Belfast on Saturday slimmed down, but in better heart notwithstanding.

That’s because, for once, there was no discord, no schism to address, no divisions over policy or personality. Basil McCrea and John McCallister have moved on since the last gathering to form their own NI21 party; Lord (Ken) Maginnis has stormed off too; while earlier still a third Assembly member, David McNarry, after yet more wrangling, exited the party to throw in his lot with the UK Independence Party.

A little agitation can bring some life to a party, but still Mike Nesbitt must have been relieved that he could address 300 delegates knowing he can start to build from stable foundations. But he would have been mindful too that the price of internal peace was the UUP now sitting at just 13 seats in the Northern Assembly, compared to 16 after the last Stormont elections in 2011.

Questions of relevancy
It has been a long-running story since the 1998 Belfast Agreement, when it had 28 seats. Any more slippage and there will be questions about Ulster Unionist relevancy.

Nesbitt, who must hope that the only way is up, is investing a lot of capital in his and his party’s opposition to the peace and reconciliation centre at the old Maze prison site. He is trusting that he is in tune with broader unionist opinion.

He boasted that his and the UUP’s campaign of opposition forced DUP First Minister Peter Robinson to make a “massive U-turn” on his support for the peace centre at the Maze. It had also demonstrated to Gerry Adams and Martin McGuinness that they would not always get their way “because we’re not going away, you know”.

Counterproductive
To reinforce his negative point, on two large screens flanking the podium were illustrations of the futuristic design for the peace centre by renowned architect Daniel Libeskind. You couldn’t help but wonder if that was counterproductive because the plan for the currently suspended centre looks truly amazing.

Nesbitt, justifying his opposition to the centre, has cited the views of victim groups. Maybe he has read the unionist mood correctly. But the counter-argument is that, by subscribing to the claim that this will be a “shrine to terrorism” or a “shrine to the hunger strikers”, he is manifesting a unionist lack of confidence.

His opposition seems to indicate that the only narrative that will apply here will be the republican one. But there are many narratives to the Troubles that could be explored at the centre, including the one to which Nesbitt himself has referred – that while unionism may have created a cold house for nationalists, that did not justify the killings of the IRA.

Even within republicanism there is no agreed account of the hunger strikes, with the argument continuing to run over whether the republican leadership permitted some of the strikers to die to facilitate Sinn Féin’s political ambitions.

The fact is that the building is designed to be what it says it is, a peace and reconciliation centre, and there are many conflicting and complex stories to be explored – not just one.

Nesbitt may have won the argument for now, but on the Maze he may yet face the accusation that he and the UUP are afraid of history.