UK exit from EU would have big consequences for Ireland, says Clarke

‘UK in Europe more valuable to US, more listened to by Russia and relevant to China’ 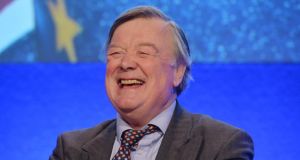 A British decision to leave the European Union would be a political error with serious consequences for Ireland, former UK Chancellor of the Exchequer Ken Clarke told a Dublin conference on Friday.

Addressing the ‘Reform or Referendum – The UK, Ireland and the Future of Europe’ conference in Dublin Castle, Mr Clarke said he remained firmly in favour of Britain’s continued membership of the European Union.

“What’s interesting to me is the Irish dimension...Were we to vote for actually leaving the EUof course you’d have great implications for the Irish Republic and us because you’re the only country with which we have a land border,” he said.

“Of course we have a considerable economic and cultural interplay as well. Irish Republic and the United Kingdom political relations are the best in my lifetime and I suspect the best since Irish independence.”

He said the Border defined the legal sovereignty of the two nations but was not currently subject to the kind of constraints and restrictions that would be necessary under a new regime.

A British decision to opt-out of the EU “isn’t going to be helpful to the steady progress of the peace process”, he added.

Ever since British prime minister David Cameron announced the EU membership referendum two years ago, eurosceptics had been trying to drive him into demanding things they knew he could not negotiate.

Mr Clarke said he would participate in a referendum in the UK if it came about although he was not generally in favour of referendums. “They’ve always struck me as a common gamble when I’ve take part in them given the seriousness of what you’re debating.”

The MP said he wished more English, Scottish and Welsh people would realise there was an Irish dimension to the question of Britain’s continued EU

“We’re in a globalised economy, we’re in a smaller political world. Inter-dependence of nation states has never been greater. Threats to peace, threats to civility, threats to prosperity remain as great as they ever were.

“Big political errors can have big consequences. So I remain firmly in favour continued membership of the European Union.”

He told his Dublin audience that “both our countries” needed to maintain a steady course back to growth.

Turning to the political situation in Britain, he described as “quite staggering” the political and economic uncertainty of the next few years, although he hoped for a Conservative majority.

“I really genuinely have never known an election that is so impossible to call three months out.”

He said it seemed clear that Britain’s ability to look after its interests depended on being a leading member of the EU.

“We are more valuable to the Americans, we’re more listened to by the Russians, we’re more relevant to the Chinese and the other emerging great powers...That gives us a base still to be at some pretty big tables in world affairs,” he said.

“If we do decide to leave than we’re just marginalising ourselves compared to where we ought to be, could be and should try to be.

“Actually none of that had to do with the EU or Brussels and I don’t think most of the present problems of the euro zone have anything to do with the euro.

“Those problems are caused by politicians in various countries, not following the rules which the finance ministers of my generation, including the Irish and British, laid down for how the euro was supposed to work.”