Opinion: ‘The chances of Loyalist or Republican paramilitary groups making a clean breast of it are slim at best. The chances of the British government owning up are zero’ 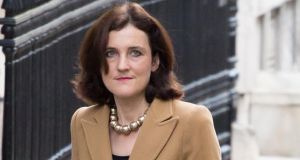 ‘Within 48 hours of Theresa Villiers’s optimistic projection, the Police Service of Northern Ireland (PSNI) announced the closure of the historical enquiries team by Christmas, due to a cut in the policing budget.’ Photograph: Daniel Leal-Olivas/PA

At the Tory party conference in Birmingham last Sunday, Secretary of State for Northern Ireland Theresa Villiers said she was hopeful talks aimed at resolving problems to do with public spending, flags, parades and the past would begin within weeks and conclude before the end of the year.

One of the reasons this won’t happen is that the government of which she is part has no intention of allowing the truth to be told about its forces’ role in the Troubles.

The chances of loyalist or republican paramilitary groups making a clean breast of it are slim at best. The chances of the British government owning up are zero.

Within 48 hours of Ms Villiers’s optimistic projection, the Police Service of Northern Ireland (PSNI) announced the closure of the historical enquiries team (HET) by Christmas, due to a cut in the policing budget. The HET, set up in 2005 to investigate unsolved Troubles murders, was already in crisis. Nationalist parties and human rights organisations, including Amnesty International, had challenged its credibility, pointing out that the unit responsible for providing documentary evidence to coroners’ courts was staffed mainly by former members of the RUC special branch and the Northern Ireland Retired Police Officers’ Association.

Instead, assistant chief constable Alistair Finlay told the Belfast Telegraph that a “legacy investigations branch” (LIB) would be established within the PSNI to take over the work of the HET.

“You’d nearly think they were laughing at us,” commented Helen Deery, whose brother Manus (15) had been shot dead in May 1972 from Derry’s walls by a soldier of the Welsh Fusiliers as he walked home from a chip shop in the Bogside.

An inquest into Deery’s killing in 1973 returned an open verdict. In June 2012 a new inquest was ordered by Northern Ireland attorney general John Larkin. The task of presenting evidence to this inquest – if ever it happens – will now fall to the LIB. Ms Deery, who has been campaigning for the truth about her brother’s killing for 42 years, is not optimistic.

The determination of successive British administrations to prevent the full truth being told is clear from a sizeable number of cases. Among the most notorious are the killings of Gervaise McKerr, Sean Burns, Eugene Toman, Seamus Grew, Roddy Carroll and Michael Tighe in Co Armagh by the special support unit (SSU) of the RUC over a three-week period in 1982. All were members of republican paramilitary groups apart from 17-year- old Tighe. None was armed when they were killed. The shootings were widely seen as retaliation for the earlier IRA killing in Lurgan of RUC officers Sean Quinn, Alan McCloy and Paul Hamilton.

In June 1986 Manchester deputy chief constable John Stalker’s inquiry into the shootings was halted when, days before he had intended delivery of his findings, he was suspended on foot of sudden allegations that he had consorted with Manchester criminals. He was to be cleared of all the allegations. The investigation was taken over by Colin Sampson of West Yorkshire police. The Stalker/ Sampson findings have never been published.

On June 4th last, the North’s most senior coroner, John Leckey, wrote to Villiers complaining that, 32 years on, he was still not in a position to set inquest dates mainly because of the failure of the state to “provide proper disclosure . . . The commencement of the hearings of these inquests remains at an uncertain point in the future . . . Some witnesses have already passed away. Undoubtedly, more will have died by the time the inquests are held.”

In 2007 Mr Leckey asked for and was allowed to read the Stalker/Sampson reports – on condition the PSNI could redact them before the victims’ lawyers were allowed access. In May 2012 Leckey asked the crown solicitor’s office (CSO) whether any of those involved in the redactions had special-branch experience. The CSO replied that the task had been carried out by five officers, of whom “four served as special branch officers and one as an intelligence officer of the RUC”.

In October 2012 the online journal the Detail quoted a former member of the SSU admitting he and colleagues had been instructed by senior RUC and special branch officers to lie about the killings to any investigation.

In April last year Leckey was told by Sir Nicholas Macpherson, permanent secretary to the treasury, that files he had asked for relating to the killings had been destroyed three months earlier.

Among the conclusions to be drawn is that Villiers’s protestations of commitment to unearthing the truth reveal a cool nerve, a brass neck and something approaching contempt for the families still waiting for the truth.