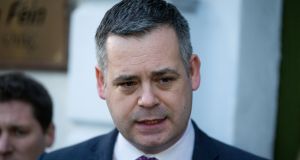 Tánaiste Leo Varadkar has expressed his “deep sorrow” to the women affected by delayed diagnosis of endometrial cancer at Letterkenny University Hospital, where a review identified a litany of errors.

Mr Varadkar also expressed his sorrow in the Dáil to the families of the women who faced adverse outcomes as a result of diagnostic delays.

He agreed with Sinn Féin TD for Donegal Pearse Doherty that conducting a review across all hospitals in the State was an important matter in the wake of the findings.

Mr Doherty on Thursday highlighted the contents of the review, which noted “a litany of failures” that had “a devastating impact and consequences for” the women affected.

It found that of the 143 cases of endometrial cancer over a 10-year period “one in three women experienced a delayed diagnosis” and that “one in five women suffered serious consequences”.

“As a result, a number of these women have since passed away, some as a result of the delay in diagnosis,” Mr Doherty said.

He added that “today we learned that things have gone from bad to worse” with a further three cases of delayed diagnosis having come to light, bringing the total to 41.

“This begs the question as to how many more delayed diagnoses are we unaware of. It is simply not acceptable under any circumstances.”

He also said the review criticised Saolta the hospital group that runs hospitals on the west coast as well as in Donegal, for undertaking its own audit of the files without the knowledge of the author of the review.

Mr Doherty said the Donegal News reported that the individual reports they received from the hospital into their care were “inaccurate and lack accountability”. He had raised the issue in the Dáil in September and was told action would be taken.

Mr Doherty said he had asked for a review going wider than endometrial cancer in Letterkenny and it had not happened.

“I asked if the Government would consider the independent panel’s recommendation for a full audit to be carried out throughout the State to ensure that Letterkenny is not an outlier. There is no evidence that has happened either.”

Mr Varadkar said: “I want to express my deep sorrow to any of the women affected and also to any of their families and friends who have faced an adverse outcome because of this”.

The Tánaiste said he had not been briefed on the issue but would raise it with the Minister for Health at the Cabinet sub-committee on health.

He told Mr Doherty he would read the independent review and said it was important that when failings or shortcomings were found in any particular hospital “to apply scrutiny nationwide”.

“If things are going wrong in one hospital it is wrong to assume that everything is okay everywhere else. Too many times we have learned that failings identified in a particular hospital or service are not confined to that service but are a more widespread problem.”