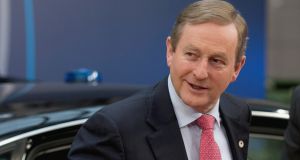 Support for the Coalition has grown in the latest political opinion poll.

Fine Gael support has risen one point to 32 per cent, according to a Sunday Business Post/Red C tracking poll.

The Labour Party are up two points to 9 per cent while Sinn Féin are up one point to 19 per cent.

Fianna Fáil dropped two points to 17 per cent, the same level of support it received in the 2011 general election.

Independents and other parties were down to 23 per cent.

More than 1,000 voters across the country were surveyed for the poll.