State willing to act on unionist claims over IRA - Gilmore 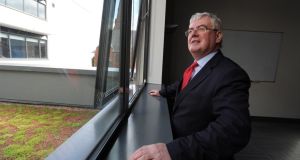 Tánaiste a Eamon Gilmore: “We need to acknowledge those unionists who feel that, notwithstanding the sacrifices made by members of An Garda Síochána and the Irish Army throughout the Troubles, the Irish State could have done more to prevent the IRA’s murderous activities in Border areas,” he said in Cambridge on Saturday night. Photograph: Paul Faith/PA

Tánaiste Eamon Gilmore has made a strong overture to unionists that the Government is prepared to investigate allegations that the State could have done more to thwart the activities of the IRA.

Mr Gilmore, at the British-Irish Association conference at the weekend, broke new political ground when he went out of his way to address a unionist “perception” of a failure by a number of Irish governments to properly combat the IRA.

“We need to acknowledge those unionists who feel that, notwithstanding the sacrifices made by members of An Garda Síochána and the Irish Army throughout the Troubles, the Irish State could have done more to prevent the IRA’s murderous activities in Border areas,” he said in Cambridge on Saturday night.

Mr Gilmore, in a separate interview with The Irish Times on the margins of the Cambridge conference, said the Government was prepared to engage on the issue in the forthcoming process chaired by American diplomat Richard Haass dealing with the past, parades and flags.

“If there is criticism of the way in which the Irish State handled particular issues I think we have to be able to hear about it,” he said.


Addressing criticisms
Asked was he referring to issues such as the 1970s Arms Crisis, unionist allegations that the IRA frequently could make easy escapes across the Border after gun and bomb attacks, and complaints about extradition legislation, Mr Gilmore said the Government would address “whatever the criticisms are”.

Mr Gilmore stressed that he was not accepting any allegation of Irish State culpability in the actions of the IRA but rather was saying the Government was prepared to confront any unionist perception of such a failure by the State.

“If you look at the lives that were given by the gardaí and members of the Army, if you look at the various efforts that were made right through the 70s in terms of the security side and then look at repeated efforts made by successive Irish governments to try and get talks going, to try and get a resolution going, I think that the Irish State has a very honourable record in that regard,” he added.

“But I think we do have to acknowledge that there are people in the unionist community who question that and do raise the question about whether or not enough was done and I think we have to listen to them,” added Mr Gilmore.


1916 commemorations
The Tánaiste also spoke of his hope that the Government “can host representatives of the royal family and the British government, along with the leaders of unionism, in Dublin in three years’ time in remembering the Easter Rising. I hope also that three months later we can all respectfully remember those who gave their lives in British uniform at the battle of the Somme”.

Such an invitation would follow the lead offered two years ago by then president Mary McAleese and Queen Elizabeth II during the latter’s successful State visit to Ireland.

Responding, the leader of the Ulster Unionist Party, Mike Nesbitt said he would be delighted to accept the invitation, “all things being equal”.