Slapping ban shows it is ‘unacceptable’ to hit a child, says James Reilly 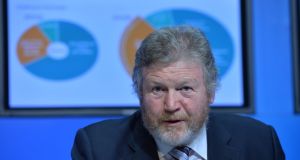 The introduction of an effective ban on slapping children will send out the message that under no circumstances is it acceptable to hit a child, Minister for Children Dr James Reilly has said.

Speaking in the Seanad, Dr Reilly confirmed he intends to abolish the defence of “reasonable chastisement” which applies to parents or child carers from common law.

Dr Reilly introduced the change in an amendment, co-sponsored by Senator Jillian van Turnhout, to the Children First Bill.

While legislation which allowed parents to use force against their children was repealed 15 years ago, the defence still existed. Ireland has been out of step with the rest of Europe on the issue, with a ban in place in most other European countries.

However, no new offence is being created and no new laws will be introduced to explicitly ban the smacking of children. The withdrawal of the reasonable chastisement defence means an effective ban will be in place.

Dr Reilly said he hopes the proposals will not only remove the defence “but will also convey a strong message which will, I hope, lead to a cultural change across Irish society that corporal punishment is wrong in all circumstances”.

The move has been welcomed by advocacy groups, such as the Irish Society for the Prevention of Cruelty to Children. Ms van Turnhout, who has tabled similar proposals in the upper house in the past, also welcomed the move.