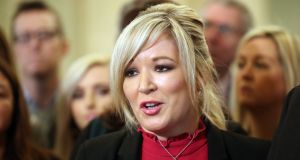 There appears to be little prospect of the North’s powersharing institutions being restored by Monday’s 4pm deadline, after Sinn Féin stated that it was withdrawing from all-party talks at Stormont on restoring the Northern Assembly and Executive.

“This talks process has run its course. Sinn Féin will not be supporting nominations for speaker or the Executive tomorrow,” Sinn Féin’s Northern Ireland leader Michelle O’Neill said at Stormont on Sunday evening.

The new Northern Assembly is scheduled to meet at noon on Monday to appoint a speaker, First Minister, Deputy First Minister and other ministers.

However, Ms O’Neill’s statement means a new Executive cannot be formed by that time.

If the 4pm deadline is not met, the Northern Secretary James Brokenshire should be obliged to call fresh Assembly elections.

However, there is an expectation that he will take time before deciding on his next course of action on the political crisis.

Earlier on Sunday, Sinn Féin president Gerry Adams and Sinn Féin sources indicated they would be withdrawing from the talks.

Mr Adams also criticised the DUP for not turning up for Sunday’s negotiations at Stormont.

“Regrettably, thus far in the talks process there has been no substantive progress across all of the key issues that are at the core of the current impasse,” said Mr Adams.

“Unionism is at a crossroads,” he added.

“The DUP needs to decide whether and when it will rise to the challenges of this time and work in genuine partnership with nationalists and republicans, and all sections of our society, on the basis of equality and respect. For everyone.”

Shortly after 5pm on Sunday, Sinn Féin negotiators, including Mr Adams and Ms O’Neill, came out of Stormont to tell the press they would not be nominating to the new Executive on Monday.

“Sinn Féin in the talks sought the full implementation of the outstanding issues of equality and rights. The governments and the DUP have failed to step up to the plate,” said Ms O’Neill.

“The British government has refused to honour its responsibilities. Their objective has not been truth and healing but continued cover-up of their actions in Ireland.

“They have also set aside the democratic wishes of the people and are intent on imposing Brexit and continued austerity.

“Sinn Féin is still intent on honouring our mandate and agreements made. We want to see the institutions restored, but when we said there will be no return to the status quo we meant it.”

At the press conference, Mr Adams said the powersharing institutions would be restored eventually.

“We are not going back to the status quo. But will they be back, will we get the institutions in place? Yes,” he said.

Sinn Féin appeared to characterise the DUP’s non-attendance at the talks on Sunday as a breaking point.

Traditionally, the DUP does not engage in negotiations on Sundays, for religious reasons.

A DUP spokesman said that Sinn Féin was well aware of the unionist party’s position in respect of talks on a Sunday.

“It should not come as a mad shock to folk that we are not there on Sunday,” he said.

He added that there would be a day of talks on Monday to try to resolve outstanding issues and, if necessary, the period of negotiations could be extended.

Minister for Foreign Affairs Charlie Flanagan was also present at the talks on Sunday.