Analysis: Labour faces a challenge to not go the way of the Greens

Fiach Kelly has the early analysis of the tallies in the City West, Dublin count centre. Video: Darragh Bambrick 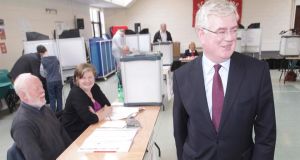 All early assessments of today’s local and European elections results come with the health warning that is too soon to be reaching definitive conclusions of where the parties will stand tomorrow.

This is particularly true of the local elections, which will see numerous close fights for the final seats, especially in the now enlarged electoral areas in Dublin and other urban centres.

However, the emerging patterns are clear, and point to an awful day for the Labour Party, or an “absolute disaster” as one candidate put it. At this stage, party sources are holding out some hope that its candidates will be in the mix for the final seats in many of the enlarged electoral areas, and there could be a few who will hold on against the tide late tonight and in the early hours of the morning.

But if Labour comes in at seven per cent of the national vote, as the RTÉ exit poll predicted - even though that also comes with a health warning - and returns no MEPs, the party is looking at its existence as a national political force becoming open to serious question. The Greens and the Progressive Democrats, parties Labour often derided for their terms in Government, often polled at similar levels. A seven per cent figure would see its number of elected councillors fall dramatically from 2009, when it polled 14 per cent and returned around 120 councillors, with some of those having since defected from the party.

Yesterday evening, Sinn Féin figures were briefing that it did not have the organisation on the ground around council areas to capitalise on the huge gains it was making in opinion polls. They claimed the bigger parties — even Labour — were better organised on the ground, but these local elections will change that.

Sinn Féin will pick up council seats in areas where Labour has lost them. It will then have the platform to build the local organisation it says it now lacks. To make matters worse for Labour today, according to tallies it is coming in sixth in the Dublin West by-election, the constituency of its deputy leader Joan Burton, behind the Green Party’s Roderic O’Gorman.

Labour has faced huge difficulties in the past and has suffered its share of election drubbings. But, with the Sinn Féin rise, it now faces a challenge to prevent itself going the way of the aforementioned Greens — who are recovering somewhat today — and the PDs. It will pray that today’s performance is something of a protest, and hope it can inch its way up before the next general election. Eamon Gilmore must hope the electorate’s bloodlust for his party has been sated today.