Gerry Adams has again dismissed going in to government as a minority party. 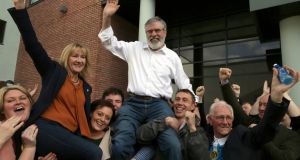 The growth of Sinn Féin’s electoral power has transformed it into party that “will define mainstream politics in Ireland from now on,” a leading politician of Greece’s ruling Syriza party has said.

Dimitris Papadimoulis, who heads the Syriza MEPs in Brussels, said the results from the Irish election showed that the “radicalisation of the Irish society was taking shape in more striking way”.

“The former coalition government has counted huge losses, with its support slumping almost 50 per cent. Sinn Féin has grown impressively, setting itself as the party that will define mainstream politics in Ireland from now on,” said Mr Papadimoulis, a vice-president of the European Parliament for the European United Left, of which Sinn Féin’s four MEPs and Luke “Ming” Flanagan are members.

“Syriza, Sinn Féin, Podemos and other left-wing political forces are part of a great realignment in European politics. The vision is common, but domestically the political balances are different,” Mr Papadimoulis said.

Acknowledging this realignment has “moved faster” in Greece, where Syriza grew from a party of 4.6 per cent to around 35 per cent in six years, he said that “the pace of success for the left” was determined by the domestic political balances in each country, which required “multiple strategies” by the different parties.

“The composition of the new parliament and the next government will only prepare the field for Sinn Féin to rise even stronger and take advantage of the new balances being formed both in Ireland and the EU,” Mr Papadimoulis said.

Although there has been no official reaction from the Greek government on the election results, sources in the office of Prime Minister Alexis Tsipras said that Athens welcomed “every step in Europe that is opposed to austerity and supports the protection of the social state, both domestically and in the EU”.