Simon Coveney: No appetite in Fine Gael for challenge to Enda Kenny 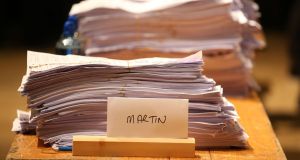 Fine Gael TD Simon Coveney conceded it has been a poor election for the party but he said he did not believe there was an appetite for a challenge to Enda Kenny’s leadership.

He said the party was likely to lose over 15 seats.

“He will obviously take on his responsibilities of bringing the party forward. I don’t get the sense that there is any panic or anything like that. People are disappointed. They are frustrated. A lot of very good people are going to lose their seats.”

“I feel very, very sorry for them because they don’t deserve that but the truth is that we did not get our message across in this campaign like we should have. We certainly did not win the argument,” he said.

Mr Coveney was speaking at Cork City Hall just after the first count in Cork South Central saw sitting Fianna Fáil TDs, Micheál Martin and Michael McGrath re-elected on the first count and he himself well placed to take a seat but running mate Jerry Buttimer facing a battle to hold his seat.

Mr Coveney said what was most disappointing for Fine Gael and Labour was that the Coalition did “a lot of the heavy lifting” over the past five years in terms of restoring Ireland’s economy, with the next government likely to reap the benefits.

“The next Government will certainly have wind in their sails – there is no doubt about that,” said Mr Coveney who played down the possibility of Fine Gael going into coalition with Fianna Fáil and said that people of all parties need time to reflect on the results when they all are finalised.

Nor did Mr Coveney rule out the possibility of a second election if no agreement can be reached among those returned to the new Dáil. “There may be a scenario where the people are asked to reconsider. If a Government cannot be put together, that is what will happen.

“But that is a number of steps before that. First and foremost we have to finish with the election. When we know how the numbers stack up on Monday, I think that will be the time for some reflection and discussion.

“First of all we have to ask in Fine Gael why this kind of result happened? Secondly, and more importantly, the responsibilities we have to the people of Ireland to actually be part of trying to constructively try to put a stable Government together.

But while Mr Coveney accepted that Fine Gael and Fianna Fáil are likely to be the two largest parties, he cautioned against assuming that they could or would want to do a deal that would see them share power.

“It won’t be easy. The maths doesn’t lie. We will be better off when we know the lay of the land. But there aren’t too many options. I don’t think it is an easy option, Fianna Fáil and Fine Gael working together,” he said.

“I don’t think there is a desire in the leadership of either party to do business - certainly during the campaign there wasn’t. You have two parties of similar size, both of whom think they should be bigger than the other.”