SF accuses DUP of yielding to hardline elements over parade

Unionists insist protest against Orange march ban must be peaceful 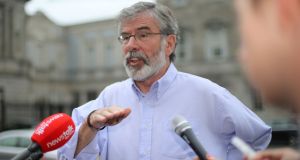 Sinn Féin leader Gerry Adams speaks to the media at Leinster House in Dublin as senior unionists met to discuss the next phase of their protest against a decision to ban a controversial Orange Order parade from passing a nationalist neighbourhood. Photograph: Niall Carson/PA Wire

Unionist leaders are being pressed to clarify what they mean by a “graduated response” in protest at a decision to ban an Orange demonstration at a north Belfast sectarian interface.

Deputy First Minister Martin McGuiness accused the DUP of being swayed by its own hardline elements and by pressure from loyalist paramilitaries.

“The agenda in north Belfast is being led by the UVF and the Orange Order,” he said.

“I think it’s very disappointing that we have now seen effectively the Ulster Unionist Party and the DUP throw in their lot with those who would attempt to foment conflict on the streets.”

He said Peter Robinson, the DUP leader and First Minister, was “not in a position to take decisions,” because of such pressure from such elements.

Senior unionists deny their aim is to threaten the Stormont institutions, to provoke civil unrest or to give in to loyalist paramilitary pressure.

“We can only seek to use our influence,” said DUP MP Jeffrey Donaldson. “At the end of the day, we are not in a position to direct people and to order them into what they should do.”

Referring to a joint protest statement agreed by the main unionist parties and political representatives of the UVF and UDA, Mr Donaldson added: “If it turns out that people do engage in violence they have to answer for that, and we will hold them to account. That’s why we wanted to bind people into a clear, unequivocal statement which makes clear that violence and unlawfulness can be no part in what we are seeking to achieve.”

PSNI chief constable George Hamilton, who has been in post for just five days, has insisted his officers will strive to protect people and to uphold the law and the determinations of the Parades Commission.

Unionist figures have been repeatedly pressed in a series of broadcast interview this morning about what a “graduated response” meant.

Ulster Unionist leader Mike Nesbitt said that would “become more obvious as the days and weeks roll out”. He declined to be specific.

“All I’m prepared to say at the moment is that ‘graduated’ is not necessarily the same as ‘escalated’, and everything we do will be lawful and peaceful.”

Political leaders had to act in defence of the electorate when people were being treated unfairly, he added.

The DUP and Ulster Unionists yesterday walked out of talks with Sinn Féin and the SDLP on issues following from the Haass/O’Sullivan discussions last December on hearing that the Parades Commission had banned the return Orange march past Ardoyne shops. It has been the scene for serious disorder in recent years. Cross-Border talks in Dublin involving Stormont ministers and the Government have also been cancelled.