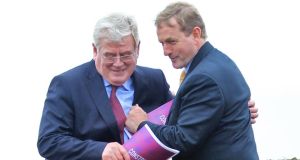 Day one of World Cup 2014, and before a ball was kicked or a beer cracked open we were already embroiled in a match-fixing scandal. And to think we once had such high hopes for the Beautiful Game.

That was back in 2011, when starry-eyed Enda and high-minded Eamon took over as Ireland’s management team and promised “a democratic revolution”. They made a promise back then: “This won’t be politics as usual.” It hasn’t quite worked out that way.

But at the end of the day, as our Coalition gaffers might say, a result is a result, Bill. Fine Gael and Labour may spout about democracy being the beautiful game, but yesterday their leaders showed they are quite prepared to win ugly, if needs be.

Following a Seanad vote at lunchtime, the Government got the result it wanted and retook control of their Oireachtas Committee on Embarrassing Fianna Fáil over the Banking Crisis. It wasn’t a fair win. Even Fifa wouldn’t get away with sticking two extra players onto a team in order to get their preferred selection through to the play-offs.

But when Enda and Eamon realised at the end of normal time last week that they were not going to have a majority on this oh-so-independent committee, they readied up an extra period and changed the rules to suit themselves.

Because, as Enda let slip to the Dáil on Tuesday, he has to be sure this non-partisan joint committee adopts the right terms of reference. Right for whom? The poor Taoiseach dreaded the havoc which two FFers on a committee of nine might cause. Particularly when independent thinkers Stephen Donnelly and Prof Seán Barrett were on board too.

How could Enda trust them to toe the Government line? Both men are quite right to be insulted by the Government’s antics. Donnelly, disgusted by “objectionable attempts to control what should be an independent inquiry”, is thinking of stepping down.

And then there’s those noted defenders of Fianna Fáil’s role in the bank crisis, Sinn Féin, and their man on the committee, Pearse Doherty. So you see, Enda and Eamon had no choice but to nobble the Opposition.

“The Government has made a complete and utter balls of this; it’s a mess,” declared

Independent senator, James Heffernan during an overwrought Order of Business in the Seanad.

What made yesterday’s carry-on all the more tawdry was the way in which Labour, in particular, sought to twist the facts around the circumstances leading to yesterday’s match-fixing episode.

Fianna Fáil was as surprised as everyone else when the sub-committee selecting the inquiry members voted their man onto the team. Denis O’Donovan, the FF Senator who chairs it, even offered an adjournment when three Government Senators – including their own nominee – didn’t turn up for the vote. But this was refused. It appears there was a misplaced presumption that David Norris would vote the same way as Labour’s Seanad leader, Ivana Bacik.

After all, those Trinity ties are supposed to mean something. But he didn’t. David’s casting vote saw Marc MacSharry through. The Government side messed up. It was a valid result. The bad sports in the Coalition wouldn’t accept it. First, they tried to get MacSharry sent to the sidelines for an alleged conflict of interest. This wasn’t immediately feasible.

Senators into the mix. “It’s the will of the people,” explained the Taoiseach when out and about pressing the flesh yesterday, suddenly finding a use for the Seanad he wanted to abolish last year.

As the Coalition went about their unpleasant business of moving the Seanad goalposts, those on the Fine Gael side had the sense to stay relatively subdued in the face of the Opposition’s fury. Not so Ivana Backtrack and Aideen Hayden-Behind-Technicalities. This might have been because Ivana is Labour leader in the Seanad and Aideen is Labour whip.

Instead of staying quiet – many of their colleagues in both Houses are blaming them for the vote fiasco – and allowing the Opposition let off some steam, they took the unusual choice to rub their noses in it. This only served to fuel Fianna Fáil’s hysterics. Ivana, trying to play the victim, accused them of carrying out an “ambush” at the selection vote. She had to withdraw the remark. Because it was untrue. When a furious Diarmuid Wilson declared Fianna Fáil was not going to “co-operate with the smooth running of business in this House”, Bacik petulantly retorted: “You never do anyway.” Senator Backtrack had to withdraw that too.

áil’s small “sensible wing” in the Upper House, lost the plot. This is a dark day for democracy, he thundered, roaring that Hitler would have been ashamed to do what the

We have never seen Ned so angry. Aideen Hayden-Behind-Technicalities did herself no favours, smirkingly talking down to the Opposition. Aideen was appointed by the Tánaiste, so the will of the people doesn’t really apply to her. “This may be too legally complex for some of the eminent minds on the other side of the house,” she sneered, dredging up a procedural technicality to justify what she was about to vote through.

Aideen opined that she always thought the inquiry team was too small in the first place. “It’s a lucky coincidence we have two additional Senators on it.” It’s not. It’s a fix.

Meanwhile, beyond in the Dáil, Eamon Gilmore was giving an indication that those rumours of him wanting the big job in Europe may not be far off the mark as he shamelessly blamed Fianna Fáil for pulling a “stroke” to get their man onto the team. This was simply untrue. Democracy – the Beautiful Game. Enda and Eamon played it, once.