State Papers 1986: Naval Service had no suitable craft for requested ‘pilgrimage’ by relatives 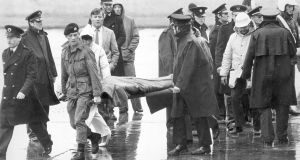 A fatal victim of the Air India crash arrives is removed from Cork Airport on a stretcher. 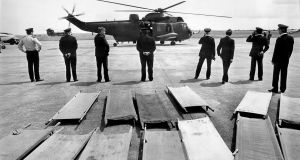 A request by relatives of the Air India disaster victims for a naval vessel to take them to the crash site on the first anniversary of the tragedy was rejected, according to a file from the Department of Foreign Affairs.

A document on the 1986 file, now held at the National Archives, said there was no vessel available to make the trip.

Air India Flight 182 was at 30,000 feet off the southwest coast of Ireland on June 23rd, 1985 when it was destroyed by a bomb, killing 329 people including 280 Canadians, 27 British citizens and 22 Indians. Only 131 bodies were recovered and these were brought to Cork Regional Hospital where postmortems were carried out.

In a handwritten letter to Sean Murphy of the Irish Tourist Board in Toronto, dated February 20th, 1986, Dr Yogesh C Paliwal, spokesman for the Flight 182 Victims’ Families Alliance, said a “real pilgrimage” to the crash site would be “a ray of bright light” for them in their grief.

“We indeed long for this once in our devastated lives opportunity to go where the remains of our loved ones lie,” he said.

“The magnitude of devastation and misery created by this heinous act of unprecedented terrorism are immense and the consequences for those next-of-kin who remain are very pathetic.”

He wrote of the men left without “any of their family”, the dozens of women left “without their husbands and children” and many parents left “without any of their sons or daughters whom they painstakingly raised with dreams of great futures”.

Mr Paliwal asked the tourist board to arrange a ferry for the transport of 60 to 70 people to the site, and also thanked the people of Cork for their “kindheartedness and hospitality”.

A petition, also contained on the foreign affairs file, was sent by alliance members, to the secretary of state for external affairs in Canada requesting support for a ferry trip to the crash site.

And Mr Paliwal also wrote to then minister for foreign affairs Peter Barry on March 31st, saying the alliance understood there was a difficulty obtaining a ferry boat and asking whether an Irish naval vessel might be used.

In a response on file dated May 9th, Mr Barry said the site of the crash was a 24-hour round trip from Ireland and sleeping and catering would be required.

“Unfortunately, the Irish Naval Service, which is quite small does not have a vessel of sufficient size suitable for the purpose,” he said.

In a separate internal note, dated May 6th, the Department of Defence said the use of a vessel was “out of the question”. It said only the LE Eithne was remotely capable of meeting the requirements for “up to 200 people”, but it would be leaving for the US on June 8th.

“Even if the LE Eithne was available it is most unlikely that it would be made available as Department of Defence would not be able to guarantee the passengers’ safety,” the note said.

There is no record that the trip ever went ahead.

Also on the file, bills showed the naval service involvement in the salvage operation, using the LE Eithne and the LE Aoife, cost almost IR£150,000 (€190,460).

The coroner from Cork city also submitted a bill for £15,000.

In a note, D Sheehan from the Department of Foreign Affairs told EJ Carroll, first secretary to the ambassador in New Delhi, he believed the “Indian authorities will probably be asked to foot the bill”, but no final decision had been made.

Another letter, from Mr Carroll to the Department of Foreign Affairs, said “if there is any question of charging the Indian authorities for any expenditure, we would be grateful to be informed”.

He also said a newspaper had reported that neither Air India nor the Indian government had received any bill from countries involved in the rescue operation.