Re-election of Pat Rabbitte as TD likely if he runs, poll shows 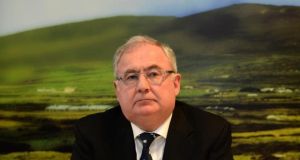 Labour TD Pat Rabbitte has said he resolved not to run in the next general election when he was demoted in the Cabinet reshuffle. However, he added he has changed his mind every week since. File photograph: Dara Mac Dónaill/The Irish Times

An internal Labour poll shows Pat Rabbitte would be elected if he runs for the party again.

The former minister for communications and former leader of the Labour Party is undecided about whether to contest the next general election.

A poll, seen by The Irish Times, predicts Mr Rabbitte would secure the third seat in the Dublin South West constituency.

It shows Sinn Féin TD Seán Crowe would top the poll in the five-seater. Anti-Austerity Alliance TD Paul Murphy would build on his byelection success with 17 per cent of first-preference votes.

The poll suggests Mr Rabbitte would secure the third seat after the fourth count.

It is believed the figures were given to the former minister in recent days to try to convince him to stand again.

The party said there has been a drop of up to 59 per cent in support for Labour in the area. Most of it has gone to Mr Murphy, who has been campaigning against the introduction of water charges.

However, according to the poll, transfers from Mr Crowe, Mr Murphy and Mr Rabbitte would strongly benefit the other Sinn Féin candidate, Sarah Holland.

This could see two Sinn Féin candidates elected in the constituency.

Fianna Fáil’s candidate, John Lahert, isn’t polling strongly. He is set to secure just 6 per cent of the first-preference vote and is not picking up the essential transfers.

Labour officials are eager for Mr Rabbitte to stand in the next general election. A date for their selection convention is believed to be in three weeks.

Mr Rabbitte is meeting party officials today to determine how long he has left to make a decision. He has insisted he does not have his mind made up.

The Labour TD said he resolved to quit when he was demoted in the Cabinet reshuffle. However he said he has changed his mind every week since then.

The former minister for communications has an extremely tense relationship with party leader Joan Burton.

One Labour source said the relationship was “non-existent” after Mr Rabbitte lost his Cabinet portfolio in the reshuffle.

However, the party is keen for him to contest the general election.

“The party knows Pat will secure a seat at a time when we are looking at smaller numbers being returned to the Dáil.

“But there is deep tension between Joan and Pat. He might not run just to cause a headache for her.”

Cllr Pamela Kearns is the natural successor if Mr Rabbitte does not stand.

She ran in the 2014 byelection and secured 8.5 per cent of the first-preference vote.