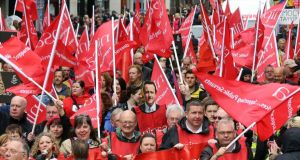 Anti-G8 protesters during a rally in Belfast city centre ahead of the G8 summit of world leaders. Photograph: Paul Faith/PA


Protesters have rallied at Belfast’s City Hall against the agenda of the G8 leaders who assemble in Co Fermanagh on Monday and Tuesday.

The protest, organised by the Northern Ireland committee of the Irish Congress of Trade Unions, marched from Custom House Square to the city centre in a peaceful yet noisy demonstration calling for an end to world hunger and a switch away from austerity in the developed world.

Smaller protests have been mounted across central Belfast yesterday, notably outside the Waterfront Hall where US president Barack Obama is to make an address later today.

Saturday’s turnout was affected by persistent rain and while police estimated the crowd at about 1,500, other participants claimed the true total was up to 10 times that.

The dismal weather also hit the expected turnout for the Enough Food For Everyone If (IF) world hunger campaign concert in Belfast’s Botanic Gardens.

Church service
Archbishop of York Dr John Sentamu hosted a church service yesterday as part of the IF campaign in St Macartin’s Cathedral in Enniskillen.

The City Hall rally was led by the main public sector and health unions and included protesters from local protest bodies and pressure groups. Amnesty International was well represented as were pro-Palestinian groups, environmentalists, the Communist Party of Ireland, Connolly Youth, the 32-county Sovereignty Movement and the Irish Republican Socialist Party.

Protesters also highlighted local issues from the threat to care homes for the elderly to the prospect of fracking for shale gas in Fermanagh and some Border counties.

There was a significant security presence with dozens of PSNI armoured vehicles at key junctions in the city centre and close to City Hall which had protective screens fitted on its stained glass windows.

Relaxed mood
However, the mood was relaxed and police officers, none of whom was in riot gear, mingled easily with the crowd.

The march was met at City Hall by the northern chair of Ictu, Pamela Dooley, and Belfast lord mayor Máirtín Ó Muilleoir.

She said there is an obligation on the trade union movement and civil society to stand together “to demand a different and better way” and a change from the “consequences of a corrupt capitalist system bereft of moral standards”.