Question now is who can replace Joan Burton as Labour leader 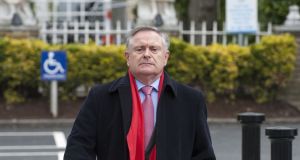 The writing has been on the wall for Joan Burton since the results of the general election began to trickle through.

A government party with 37 seats in the Dáil was reduced to a marginal opposition party with only seven TDs.

It was the worst result the party has ever had, with a number of ministers losing their seats and the new generation of TDs wiped out.

In some ways Burton has been lucky to retain the party leader’s post five weeks on from such a devastating election. Had the result been less catastrophic, the knives would have been sharpened in the same way as they were for her predecessor Eamon Gilmore. But instead the party has spent the last five weeks grieving its losses.

However, as time passes it is evident that Burton’s position is becoming untenable. The question is who can replace her.

It appears to be the hope of many senior figures that Howlin will serve as a caretaker leader until the next general election.

Under the Labour constitution a leadership election must take place within six months of a general election.

Some Labour sources suggest Burton is well aware her time is up, but say she wants to avoid any possibility of the party being caught up in a leadership contest at the same time as another general election.

Others say she has not accepted the outcome of the election and has sought to lay the blame on everyone except herself.

Either way, the party’s predicament is far bigger than the choice of party leader. It is now a question of survival.

Labour must find a way to distinguish itself from others on the crowded opposition benches.

It also faces an identity crisis forced upon it by the emergence of new political parties.

The issues that saw Labour stand out from the crowd at the time of the 2011 general election are the ones drawing voters to the Social Democrats, Sinn Féin and the Anti-Austerity Alliance-People Before Profit.

The voting pact with Fine Gael and its alignment with the bigger Government party proved catastrophic for it.

For Labour the choice is now whether to select an interim leader who can safely steer them into another election or to choose one who can provide a long term strategy and vision for the party.