Prosecution of soldiers for Bloody Sunday could be ‘disastrous’ - MP 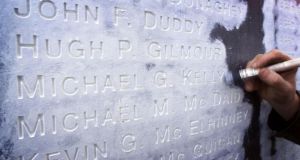 DUP MP Gregory Campbell has warned that the prosecution of British soldiers who were involved in the Bloody Sunday killings could be “disastrous” for how the legacy of the Troubles is addressed.

The East Derry MP issued his warning following a report that up to 20 retired British soldiers face being arrested and questioned by police for murder as a result of the Bloody Sunday shootings on January 30th, 1972. Thirteen men died on the day while a fourteenth died later from his injuries.

The Saville inquiry into Bloody Sunday published three years ago found that all the victims who were shot during the civil rights march in Derry were unarmed and that all the killings were “unjustified and unjustifiable”.

It prompted an apology from British prime minister David Cameron that was welcomed in Derry.

The report in today’s Sunday Times said that some of the soldiers, now in their 60s and 70s, may face prosecution and criminal trials. It said the British Ministry of Defence has started hiring lawyers who will represent the former soldiers.

In an official statement, a PSNI spokesman responded: “Preliminary work has begun into what will be a lengthy and complex investigation into the events of 30th January, 1972.

“For the investigation to be as comprehensive and effective as possible, police will be asking for public support in the form of witnesses who gave evidence to the Saville Inquiry now making statements to detectives. This is because police are precluded from using Saville testimony in a criminal investigation.”

However, any suggestion of imminent arrests or questioning of former soldiers is wide of the mark, senior PSNI sources added today. They said while ex-soldiers could be questioned about Bloody Sunday that it could take up to 12 months and possibly longer before that would happen such is the detail and complexity of the investigation.

In July last year the special PSNI investigation into Bloody Sunday was announced with a team of 15 detectives later established to carry out the inquiry. It was stated at the time that the investigation could take at least four years.

The DUP MP Mr Campbell repeated his criticism of the investigation yesterday. “If newspaper reports prove to be accurate that soldiers who were in the Bogside in Londonderry on the day known as ‘Bloody Sunday’ are to be prosecuted, this could prove disastrous in how our society deals with the past,” he said.

“For many years those at the helm in the IRA have either denied being in the organisation, like Gerry Adams, or will not talk about any events that happened when they were, like Martin McGuinness. This has resulted in no action by police or Prosecution Service against them.

“If it transpires that troops, who were in the Bogside because of the actions of the IRA who had murdered more than 100 people before ‘Bloody Sunday’ and had caused massive destruction and unrest also, this would demonstrate the perversity at the heart of dealing with the past,” said Mr Campbell.