“Of all the regions of France, none is closer to Irish hearts than Brittany,” said the President 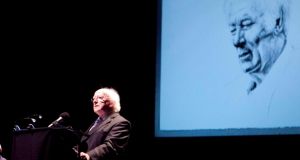 Ireland and Brittany are closer then ever, following President Michael D Higgins’s visit to the Festival Interceltique this weekend.

“Of all the regions of France, none is closer to Irish hearts than Brittany,” Mr Higgins said at a reception on the Irish Naval Service’s patrol vessel LE Niamh. “I understand that, likewise, nowhere in France is there more interest in Ireland than here. Our landscapes and are coastlines are so similar. Our climates are in dialogue with, and almost equally affected by, the vast Atlantic Ocean.”

Founded in the 18th century, Lorient was reborn as a modern city after its destruction in the second World War. It’s usually sleepier than its twin city, Galway. But during the 10-day festival, when Irish tricolours hang from balconies, the smell of oysters, beer and crepes wafts through crowded streets, against a round-the-clock barrage of revellers, rock music and bagpipes.

Higgins and his old friend, the French defence minister Jean-Yves Le Drian, sat together at the gala concert on Saturday night, and again in the stands at the Stade du Moustoir for the Grande Parade des Nations Celtiques yesterday morning. They compared French and Irish experiences of the first World War, and Le Drian described Higgins as “a preacher for peace.”

Séamus Heaney seemed to stare down, Mount Rushmore- like, from Martin Gale’s drawing projected on the stage at Saturday night’s Glanmore concert in honour of the late poet.

Doireann Ní Bhríain, who read six of Heaney’s poems in English and in French, said “we are still under the shock of his sudden death”.

The President, who read Heaney’s The Given Note, said: “We miss not only his words. We miss his presence.”

After 44 years, the festival has taken on a kind of permanence, as has Lorient’s relationship to Galway. Mayor Norbert Métairie said the cities shared la céltitude, which he defined as “having roots somewhere and at the same time being open to the world”. Celts, he said, are “people on the periphery of European history” who take strength from their roots today.

Michael Dodds, Irish director of Tourisme Bretagne, said he was impressed with how Bretons “pass their heritage from generation to generation”.

The relationship between Ireland and Brittany has been consolidated by people like Reuben Ó Conluain, who has been the volunteer liaison between Ireland and the festival for 28 years (and who prepares the Irish syllabus for the Leaving Cert in his real job), and Pádraig Larkin, owner of the Galway Inn, who moved from Galway to Lorient in 1982.

“The Bretons know Irish music better than a lot of Irish people do,” Ó Conluain said.

Larkin, who describes himself as “50 per cent Breton and 100 per cent Irish,” followed a French au pair girl to Lorient, then stayed for Nadia, his French wife.