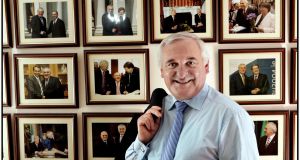 Brian Cowen has been known to tell people that he subscribes to the Liam Cosgrave code of etiquette for former taoisigh: when you’re out, you lay low and keep your counsel.

The same cannot be said of Bertie Ahern, the three-time taoiseach and general election winner with Fianna Fáil, the party he once led to huge success but left under a dark cloud.

Many in Fianna Fáil chuckled at the news of a motion passed at a constituency meeting in his old Dublin Central stomping ground inviting him to rejoin the party. Others tutted.

What, asked one party figure, could distract them from walking the tightrope of water charges but one Bartholemew Ahern?

The majority of people in Fianna Fáil circles are highly sceptical that Chris Wall, one of Ahern’s long-term associates, spontaneously thought to put down the motion on foot of the former taoiseach being praised at the Comhairle Dáil Ceantair meeting.

It is almost five years since Ahern left Fianna Fáil following the publication of the Mahon Tribunal report. In one of his early tests as party leader, Micheál Martin moved to expel Ahern, who subsequently resigned before he was pushed.

Despite Martin only dealing with Ahern in a similar manner to how he himself treated his former mentor Charlie Haughey, it left a bitter taste and the relationship between the pair is distinctly cool.

Just weeks before the publication of the tribunal report, Ahern practically goaded Martin by walking the floor at an ardfheis, one of the last occasions he attended a Fianna Fáil event as a member.

Since then, he has gradually tried to ease his way back into public life, with his appearances becoming more frequent as public hostility eased with the passing of the economic crisis.

His performance at the banking inquiry in the summer of 2015 was judged a success, but he then undermined it by appearing on Miriam O’Callaghan’s radio show the following weekend when he refought the same Dublin Castle battles over his labyrinthine personal finances.

Since then, he has mostly stuck to topics such Brexit and Northern Ireland, playing the elder statesman and urging public patience as the minority Government took shape.

When asked over the past few years why Martin had not extended the hand of reconciliation to Ahern, party sources replied that no membership application had been made by the former leader.

The way has now been cleared for such an application to be made, if Ahern follows through on the motion tabled at the constituency meeting.

The Dublin Central event took place in the Skylon Hotel in Drumcondra, just across from where Ahern currently keeps a modest office in a small business park. His previous citadel of St Luke’s is just a couple of hundred metres down the road, but an age away.

There, the walls were decorated with pictures of Ahern with foreign leaders, dignitaries and sportspeople. His current office is modest by any standard, an upstairs room in a shared facility that looks from the outside like a normal family home.

Perhaps Ahern, like his contemporaries Tony Blair and Bill Clinton, misses the limelight and the public adoration.

In an age when youth and energy are seen as precious political commodities, those who once radiated such characteristics often struggle to find a suitable role for themselves if they left office while still relatively young.

If he applies to rejoin the party, it will, in practice, be for Martin to decide whether Fianna Fáil can cope with the baggage that one of the party’s most successful and controversial figures will bring.

Perhaps, after years as pariah, Ahern wants to be taken seriously again, not least in Fianna Fáil.