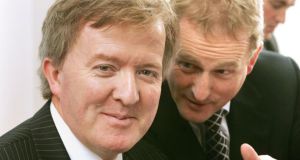 Minister of State for Small Business John Perry has declined to say how he reconciles his dealings over an unpaid €2.47 million bank debt with his obligations under the official code of conduct for office-holders.

Amid doubt in Fine Gael about his capacity to stay in his ministry due to the default on his debt with the Danish-owned Danske Bank, Mr Perry has insisted his official filings with the State’s ethics watchdog are fully up to date. Although Government figures including Taoiseach Enda Kenny have backed Mr Perry in public, senior Fine Gael activists believe his credibility as Minister has been severely compromised.

Danske secured judgment against Mr Perry and his wife Marie for €2.47 million in the Commercial Court last week. The ruling was stayed to September to allow time for a final effort to restructure the loans.

Prolonged engagement
Court exhibits point to a prolonged engagement between Mr Perry and Danske, including attendance at meetings in the bank and correspondence on his personal banking difficulties in which he used his ministerial title. However, the code of conduct that applies to Ministers of State says an office-holder “should not carry on a professional practice while in office but may make arrangements for the maintenance of a practice until such time as s/he ceases to be an officer-holder and returns to the practice”.

The code also says officeholders “should not take any part in the decision-making or management of the affairs of a company or practice and should dispose of, or otherwise set aside for the time being, any financial interests which might conflict, or be seen to conflict, with their position as an officeholder”.

The Irish Times asked Mr Perry yesterday whether he believed he was in compliance with the code. He was also asked how he reconciled his engagements on private banking matters with his obligations under the code. In addition, he was asked when he first submitted a tax clearance certificate to the commission after he was made Minister.

The Cabinet appointed Mr Perry in March 2011, the month after the general election. Under rules updated by the Government in November 2011, all office-holders must provide the Standards in Public Office Commission with a tax clearance certificate “not more than nine months after the date upon which he or she was elected or nominated.”

In response to questions, Mr Perry’s spokeswoman said: “Minister Perry is up to date with his Standards in Public Office Commission filings. Minister Perry has no further comment to make.”

The standards commission, which oversees the ethics legislation and associated guidelines, had nothing to say about Mr Perry’s case.