Peacemaker wanted to end ‘terrible cycle of death’ in North 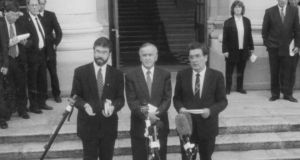 Albert Reynolds believed his greatest political achievement was helping to bring an end to what he called the “terrible cycle of death” in Northern Ireland.

He was a central figure in the search for peace and was a pivotal player in negotiations ahead of the first IRA ceasefire and the 1993 Downing Street Declaration, which pre-dated the Belfast Agreement.

During his lifetime, other key figures in the process paid warm tribute to Mr Reynolds’ role.

Senator George Mitchell, US peace envoy, credited him with “laying the groundwork” for peace in the early 1990s. “Yours was the story, the important one,” he told Mr Reynolds.

Former British prime minister John Major described the ex-taoiseach as “a trader and a dealer”.

“Much of what was the Good Friday Agreement was in fact the Downing Street Declaration and the Framework Document with knobs on,” Mr Major said.

This morning, Taoiseach Enda Kenny said Mr Reynolds played an important part in bringing together differing strands of political opinion in Northern Ireland during his term as taoiseach.

“As a consequence [HE]made an important contribution to the development of the peace process which eventually lead to the Good Friday Agreement.”

Former taoiseach Bertie Ahern said Mr Reynolds had put a “huge amount of energy” into the situation in the North.

“If there hadn’t have been a Downing Street Declaration I don’t think there would have been a ceasefire in the first place,” he told RTÉ.

Another former taoiseach, John Bruton of Fine Gael, assessed Mr Reynolds work ahead of the Downing Street Declaration as “absolutely crucial”. It was his “enduring legacy” that established a framework that allowed peace to follow.

Sinn Féin leader Gerry Adams this morning said: “Albert acted on the North when it mattered.”

In his autobiography published in 2009, Mr Reynolds wrote that he had “given my word” to both president Bill Clinton and Mr Major in 1994 that there would be a ceasefire in Northern Ireland.

He said he sent an ultimatum to Mr Adams and Martin McGuinness.

“I demanded a ceasefire by the end of August or I was closing everything down. I’d put my life and career on the line to support them: now they had to call it, or I was walking away and the chance for peace would be lost for another 25 years.”

He said it turned out to be “a risk worth taking”.