Paisley told Blair you ‘fool’ after conversion to Catholicism 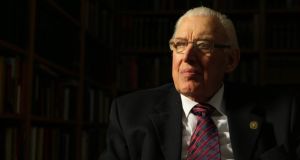 Former First Minister and Democratic Unionist leader Ian Paisley: said if one of his family had become romantically involved with a Catholic: “I wouldn’t have liked it but we [he and his wife Eileen] would lump it.” Photograph: BBC NI/PA

The Rev Ian Paisley told Tony Blair he was a “fool” when the former British prime minister told him in 2007 he was about to convert to Catholicism.

The encounter is recalled in a television documentary to be broadcast on BBC tonight, during which Dr Paisley speaks about his special relationship with Mr Blair.

Dr Paisley recalls a meeting in Mr Blair’s private room and how, as they were leaving together, the prime minister said: “ ‘Ian, there is something I need to tell you. When the hands of that clock come to 8 o’clock, I will be a Roman Catholic.’

“He said, ‘I did not want you to leave without telling you, I’d rather tell you myself.’ And I said, ‘You are a fool’ and I walked on.”

During the documentary, Paisley: Genesis To Revelation – Face To Face With Eamonn Mallie, Dr Paisley is asked by his interviewer how he would feel if one of his family became romantically involved with a Catholic.

He first jokes that he would have bought a “long cane” and used it, but adds: “I wouldn’t have liked it but we [he and his wife Eileen] would lump it.”