OPW asked to explain why it started charging Caranua rent 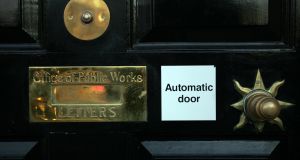 Caranua had been due to leave its current OPW-managed accommodation in June 2016, however the lease was extended for a year. Photograph: Eric Luke

The Office of Public Works (OPW) needs to clarify why it changed policy and began charging Caranua for office space, according to the Public Accounts Committee.

Caranua, the State body established to distribute religious funding to survivors of institutional abuse, has paid €53,000 in the past year for office space.

Caranua had been due to leave its current OPW-managed accommodation in June 2016, however the lease was extended for a year.

The OPW advised Caranua they would be levied for a contribution of €106,000 for this lease extension.

The Comptroller and Auditor General Seamus McCarthy told the Committee on Thursday morning Caranua had not been paying rent to the OPW in 2014 and 2015 but “the situation changed in 2016”.

“There is a note in the financial statements about pointing to the fact that OPW was carrying the cost of their rent for the first number of years,” he said.

Mr McCarthy added he was not sure why the OPW had changed its arrangement with Caranua.

“That seems to me the thing that isn’t answered here, that one time it was ok for OPW to provide the accommodation without charging it but now they’ve changed policy,” he said.

The committee’s chair, Fianna Fáil TD Sean Fleming, said: “we’re writing to the OPW to ask to explain why they’ve changed their policy.”

Independents4Change TD Catherine Connolly said “why suddenly is the Office of Public Works insisting on the rent?”

According to the OPW, which has sourced new accommodation for the State body, Caranua has agreed to pay rent of €272,396 per year, including €9,000 a year for three parking spaces for the next three years.

The Department of Education said previously Caranua has not sought the approval of the Minister for its plan to pay almost €820,000 from the survivors’ fund for rent at a new premises, despite a requirement in the governing legislation to do so.

Ms Connolly said: “Nobody, the Department of Education, the OPW or Caranua has explained why they need to move into expensive premises … I think it’s an obscenity that Caranua would be paying rent of €270,000 including €8,000 or €9,000 for three parking spaces.”

Mr Fleming added the Public Accounts Committee would be writing to Caranua to clarify whether it got Ministerial consent for the arrangement with the OPW in 2016 and would be “double-checking” that with the Department of Education.