Taoiseach and Tánaiste subject to ‘heavy-handed thuggery’ at water protests 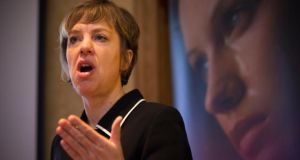 Ivana Bacik said she hoped colleagues across the House would join her in condemning the violence and acts of criminality that arose during certain protests over the weekend and since. Photograph: Fergal Phillips

Fianna Fáil Senator Ned O’Sullivan described as “heavy-handed thuggery’’ the treatment of the Taoiseach and Tánaiste at public protests.

“I do not care whether they are members of Fine Gael, Labour, Fianna Fáil or any other party,’’ he added. “They are the leaders of our country and members of the Cabinet.’’

Mr O’Sullivan said all Oireachtas members were entitled to be protected from that kind of behaviour, adding that it appalled him to see what was happening. Members of the Oireachtas, he said, had the greatest megaphone of all in that they were among 166 people who could stand up and fight their corner.

“But instead they are resorting to street politics and inciting people,’’ he added.

Ms Bacik said it was unfair to the “unfortunate 60 people’’ graduating in Tallaght in a project founded many years ago by Senator Katherine Zappone.

“It is unfair to them when protests are disrupted and hijacked in this way by violent elements.’’

Mary Moran (Lab) said she agreed with the Tánaiste’s comments that “the protest and antics’’ in Tallaght overshadowed the achievements and importance of the day for the graduates, who had worked and studied long and hard to get to that point.