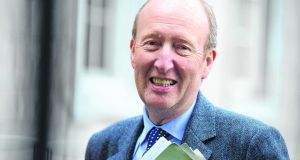 Minister Shane Ross: “I welcome the stated commitment of the DAA to work closely with all stakeholders, including local residents and community groups, on the north runway project.’’ Photograph: Cyril Byrne

Minister for Transport Shane Ross has said he will not allow a State monopoly to bully any group of local residents.

He said he would raise concerns of residents in north Dublin about noise levels from a proposed new airport runway with the Dublin Airport Authority (DAA). “It seems to me that State bodies of this sort are always in a position of great advantage over small groups of people.”

He said while he agreed the necessity for the second runway was compelling, it was imperative those who had lived in the affected area should not have their safe and reasonably quiet residences ruined, and certainly not without adequate compensation. “I welcome the stated commitment of the DAA to work closely with all stakeholders, including local residents and community groups, on the north runway project.’’

Mr Ross said an EU regulation on noise, including one relating to airports, came into force this month.

“This regulation sets out the process to be followed when decisions are being made on noise-related operating restrictions and involves consideration of all potential aircraft noise-mitigation measures.’’

Mr Ross added his department, the Office of the Attorney General and the Department of the Environment were engaged in discussions on the technical details of the appropriate implementation of the regulation.