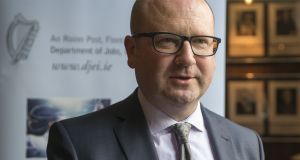 A Labour Private Member’s Bill allowing for self-employed people to collectively pay bargain with employers was passed by the Seanad.

He said it was the culmination of a 12-year campaign and would ensure Ireland complied with its obligations under the International Labour Organisation.

“We might be in Opposition, but Labour is still delivering significant change for working people,’’ Mr Nash added.

“We expect these important reforms will quickly get through the Dáil and will be in force by the middle of 2017.’’

The Competition (Amendment) Bill 2016 was first introduced in the Seanad last January by Senator Ivana Bacik. It was accepted by then minister for jobs Richard Bruton and has since been agreed to by his successor, Mary Mitchell O’Connor.

Ms Bacik said under current competition law self-employed people were considered to be a separate and independent economic unit.

“If one self-employed person combines with others to set prices for their services, they can be accused of an illegal anti-competitive practice,’’ she added.

“We know the situation has moved on,’’ he added.

Mr Gavan said there was need for a firm and clear starting date for negotiations for a successor.

“Key principles should come into play in the negotiations such as equal pay for equal work,’’ he added.

He said it was shocking the Government would not commit to that simple principle.