Remembering when Fine Gael flirted with a left-wing agenda

Opinion: Declan Costello’s programme may have been prompted by a realisation that he could not stay in the party unless it changed 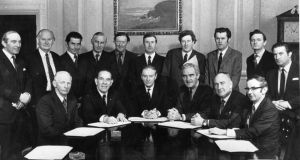 Declan Costello, second from right at back, attorney general in 1973. Photograph: Pat Langan

Fifty years ago a politician published a manifesto which, if implemented, would have changed the nature of Irish society, would have defied the ethos of contemporary political culture and would have spared us so much of the misery caused by the recent crisis.

Its clarion call was to make “a reality of two concepts: freedom and equality”. It proposed full-scale economic planning, not just of the public sector but of the private economy: it demanded that banks be brought under government control; that the State would provide jobs through direct investment; it urged a reversal of the trend towards indirect taxation and more direct taxation (ie income tax); and effective price control. It proposed increased social expenditure, the radical reform of the health, education and housing sectors. In other words, far greater equality than then prevailed and than subsequently transpired.

Improbably, this came from Fine Gael and from a member of a family that was steeped in the traditions of that party, Declan Costello. Even more improbably, the programme was accepted in large part (a slightly toned-down version but only slightly toned down) was the Fine Gael manifesto for the 1965 general election.


Procedural ambush
I was one of those beguiled by that at the time, believing that a right-wing party, such as Fine Gael, could be hijacked by a left agenda and be transformed via a procedural, albeit unintended, ambush. The ambush occurred at a time when Fine Gael felt self-conscious about standing for nothing and offering no alternative to a resurgent Fianna Fáil led by Seán Lemass.

Costello’s programme filled the policy void and the party, unreflectively, went for it .The electorate easily saw through the improbability of a Fine Gael party dressed in socialist garb and Fianna Fáil was returned to office, yet again.

I believe Costello’s initiative was prompted, at least in part, by realisation that he could not remain in Fine Gael, but that, because of his family’s ties to the party, he had to be seen to try to change the party before abandoning it for Labour, which, at the time, was showing flickering signs of intelligent life.

Fine Gael got over its infatuation with a left agenda with indecent speed but still, even now, it protests that it remains the party of the “Just Society”, which is a ludicrous claim since today the party disavows every scintilla of what that programme contained.

The party’s current ethos is captured by Enda Kenny’s “vision”: to make Ireland “the best little country in the world in which to do business”. And in pursuit of that “vision” the party is committed to the following:
n A preponderant reliance on foreign direct investment for job creation, which involves downward pressure on wages, even for the low paid (particularly for the low paid?). The idea that the State itself might be engaged directly in job creation is now anathema under domestic ethos and European law.

n A low direct tax strategy or at least a low income tax strategy, accompanied by an increase in indirect taxation (ie VAT).

n A banking policy which socialises bank losses and seeks to privatise, as soon as possible, bank profits by returning the banks to private ownership, with only marginally tighter regulation than previously applied.

n A strong commitment to free markets, whereby the State is precluded from interference, aside

from its role in protecting the freedom of those markets.
n Bu t, most of all, a scorn for the very idea of equality. This is not expressed overtly but the whole venture of “making Ireland the best little country in the world in which to do business” has to be subversive of equality, for “doing business” nowadays involves “incentives” by way of low taxes and wide disparities in income, labour “reform” and, above all, free markets.

This has been driven of course by our membership of the European Union, a dimension to membership which was hardly appreciated at all when we joined in 1973 and not even contemplated when the union was augmented by the Maastricht treaty and, later membership of the euro zone.


Inchoate ideas
We sleepwalked into a surrender not just of sovereignty but of an inchoate, largely unarticulated idea that somehow we were together in society, looking out for each other, even at times sharing our efforts and resources for the general welfare. Those inchoate ideas were certainly prominent during the struggle for independence and it was because, even in the early 1960s, they were still vibrant impulses in our culture, that a reactionary shambolic outfit such as Fine Gael could flirt with radical equality.

But that’s all gone now. Equality is regarded either as impractical in the modern world or as a crankish obsession with an “outmoded” ideology.
n This column has been prompted by the recently published A Just Society for Ireland? 1964-1987 by Ciara Meehan, which tells the story of how the “Just Society” project came into being and how it was defeated.