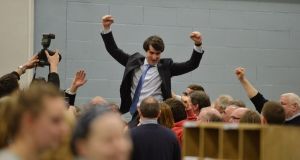 Fianna Fáil has not had a seat in Dublin West since the death of former minister of finance Brian Lenihan in June 2011. Chambers topped the poll with 2,603 first preference votes when elected to Fingal County Council for the Castleknock area in 2014. He went on to beat Councillor David McGuinness by a ratio of two to one at the selection convention for the party. The 25-year-old is the youngest TD to be elected in the 32rd Dail.