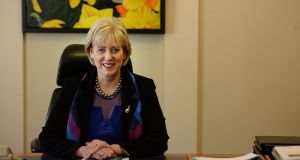 Heather Humphreys was a surprise choice when she was made Minister for Arts, Heritage and the Gaeltacht in 2011. As a new TD, she did not even expect a junior ministry. She was drinking tea with colleagues in the Dáil restaurant when she received a call to Taoiseach Enda Kenny’s office. Despite her inexperience, her performances at Question Time were self-assured. She was embroiled in controversy when Fine Gael nominee John McNulty was appointed to the board of the Irish Museum of Modern Art in advance of a Seanad byelection he was contesting for Fine Gael. He later resigned and withdrew from the byelection. She has been in charge of the commemoration of the 1916 Rising. She is from the village of Drum in north Monaghan and now lives in Newbliss. Educated at St Aidan’s Comprehensive, she worked in the Ulster Bank in Cavan town and later in Ballyconnell and Swanlinbar, heading the local office in Cootehill, Co Cavan, for 12 years. Humphreys was co-opted to Monaghan Co Council in 2003 and was re-elected in 2004 and 2009. She served a term as mayor. In 2011, she was only the second woman to be elected in the area since the Cavan-Monaghan constituency was formed, eclipsing the first woman, Fianna Fáil’s Margaret Conlon, at the time. She is married to Eric Humphreys and they have two daughters.