Government made a huge error in pandering to anti-politician mood 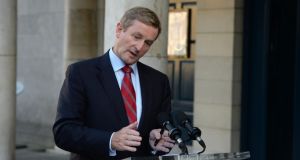 So far Enda Kenny’s response to the referendum defeat has been well judged. On the day of the count he took it on the chin and publicly conceded that he had been given a wallop by the voters. Photograph: Dara Mac Dónaill

The most disquieting aspect of the recent Seanad referendum campaign was the manner in which Government politicians denigrated their own profession.

In the failed effort to secure approval for the abolition of the Seanad they pandered to the crude caricature of Irish politics purveyed by the tabloid media and endorsed by those on the extreme right and left of the political spectrum.

The destructive and unremitting criticism of politicians, which has unsurprisingly grown in volume since the economic crisis hit, has fostered public cynicism about the democratic process which could ultimately undermine our political institutions.

Of course a healthy democracy requires that the government of the day is held to account by the opposition and the media but the incessant denigration of politicians as a class is something else entirely. It is already providing fertile ground for groups like Eirigi and right-wing populists influenced by the American tea party philosophy. The Government made a huge error in pandering to this mood in the referendum campaign. The focus of the Yes campaign on cutting the number of politicians and saving a few million euro fed into a crude anti-politician and even anti-democratic narrative.

The tactic was undoubtedly a response to focus group research which showed public anger at politicians and strong support for cutting the cost of the political system close to zero.

The sloganising reduced the opportunity for a sensible debate on the merits of demerits of a second chamber and what such a chamber should do if it continues to exist.

Combat
It is a long time ago since the Abbe Sieyes, on the eve of the French Revolution, wrote: “If a second chamber dissents from the first, it is mischievous; if it agrees, it is superfluous.”

In recent weeks we have seen what happened in the United States when the various arms of government were locked in combat with each other.

Agencies shut down, tens of thousands of people were temporarily out of work and the most powerful economy in the world came close to defaulting on its debt.

That should have prompted a real debate here on whether we require a second chamber and if so what kind of one it should be. Instead we had the Yes side urging the voters to eliminate politicians and the No side arguing for a reformed Seanad without any clear definition of what that would or should be.

In the end the public played safe and, by a narrow margin, took the logical decision to vote in favour of what they know for fear of finding something worse. The outcome should be a salutary warning to politicians that focus groups have their limitations. They do provide a crude reflection of the current public mood but that is something fickle that can change in an instant.

The ultimate fate of the Bertie Ahern-led government here and the Blair government in Britain, both of whom relied so heavily on focus groups, should have showed that following the herd is no substitute for leadership.

It would be a mistake, though, to overestimate the political consequences of the referendum defeat. Over the years the Irish electorate has shown a propensity to use referendums to put manners on their political leaders but that doesn’t necessarily indicate how the next election will go.

“The voters gave Enda a kick in the arse on the Seanad but if he learns the right lesson it mightn’t do him any harm at all in the long term,” said one supporter.

So far his response to the defeat has been well judged. On the day of the count he took it on the chin and publicly conceded that he had been given a wallop by the voters. When he appeared in the Seanad chamber during the week to face some of the people who had persuaded the public to reject his plans he was emollient and considered. He listened carefully to all the suggestions about how the Upper House should be reformed and took detailed notes into the bargain.

Kenny did remark on the variety of suggestions that had been put to him. He was clearly hinting that there is no clear agreement on how the Seanad should be reformed. He did give a commitment to press ahead and implement the 1979 referendum decision giving all university graduates the vote for the six of the 60 seats filled by the university panels.

Controversial
Even that modest reform could prove controversial. For instance should it apply only to graduates of recognised universities or to all third-level institutions and how should the register be compiled?

Hopefully the Seanad reverse will not halt the prospect of wider political reform. Gradual reform is taking place in the Dáil and that process needs to be followed up with vigour until it really is a chamber where Government is properly held to account and not just a forum for political theatre.

That will only happen when TDs have the opportunity and the time to participate fully in the legislative process. RTÉ’s fascinating documentary Looking After Number One, showing how hard TDs work in their constituencies, raised all sorts of questions about our political system.

The fact is that as long as our multiseat proportional representation system remains in place the overwhelming pressure on TDs will be to behave as constituency representatives rather than legislators. That is something politicians and the wider public need to have a real debate about.