Lessons have to be learned from ‘boom and bust’ cycles- Gilmore 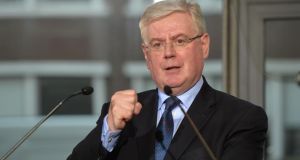 reland has had too many examples of boom followed by bust not to invest time and resources into learning lessons from it, according to Tánaiste Eamon Gilmore.Photograph: Alan Betson / The Irish Times

Ireland has had too many examples of boom followed by bust not to invest time and resources into learning lessons from it, according to Tánaiste Eamon Gilmore.

He was speaking during the Dáil debate this afternoon on a motion to establish an inquiry into ‘Certain Aspects of the Banking Crisis’.

Mr Gilmore said that Irish society was affected by the normal business cycle “but too often the hard work and enterprise of the Irish people, including the good work of the public service has been allowed to be squandered by bad politics and bad policies”.

But he said “throughout our history, Ireland has seen too many example of where boom is followed by bust”. There had been “too much pain, too much hardship, to just move on, without devoting the time and resources to learning the lessons”.

He insisted the inquiry was a task that was right for the Oireachtas to take on. “There is plenty of cynicism about politics and politicians, but there is no doubt in my mind that the Oireachtas is the right place to have this enquiry,” he said.

“Hundreds of thousands of people lost their jobs. Many more have suffered pay cuts, while more again have been forced to emigrate.”

He said “a generation of people have suffered the consequences of negative equity and the following collapse of the construction industry. Ireland lost its economic sovereignty and had to be bailed out. The country was placed under the supervision of the Troika while difficult decisions were taken to return the public finances to order.”

In those circumstances he said, the Irish people were entitled to a full account of the crisis.

Fianna Fáil leader Micheal Martin said they needed to be very clear about what the inquiry would seek to achieve. His party welcomed the inquiry and believed it had an important role to play in dealing with the aftermath of the effective collapse of the financial system and its damaging long-term impact.

Mr Martin said that if the inquiry was to serve any positive purpose and to answer a clear public demand and reflect well on the Houses, “it must mark an end to the cynical and partisan approach which has dominated how the Government has approached it”.

Sinn Féin finance spokesman Pearse Doherty warned that there were still criminal cases to be taken in the next few months in relation to the banking inquiry. And he said the inquiry could be no substitute for criminal investigations into those who might be guilty of any wrongdoing in the lead in to the banking crisis or its aftermath.

Independent TD Shane Ross said he was very doubtful about the capacity of the Dáil to make judgments without political bias. The Dublin South TD said he had ruled himself out immediately as a potential member of the committee of inquiry because “I am biased against bankers”. He had “learned” that bias because of the way bankers behaved in the run up to the crisis and he said because of the way they continued to behave.

Independent TD Stephen Donnelly suggested there should be an extra non-Government committee member so there wouldn’t be a Government majority and he said the party whip should be removed from TDs on the committee.

The Dáil voted by 85 to 34 to establish the inquiry.