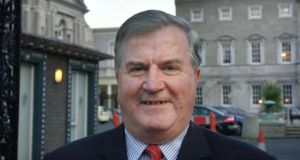 Terry Leyden: “Brian Lenihan was making a last-ditch attempt to burn the bondholders, but that was refused by Mr Trichet who had previously indicated that he would give some concession.” Photographer: Dara MacDónaill

Fianna Fáil Senators have accused then ECB president Jean-Claude Trichet of bullying Ireland into a bailout and programme of austerity in November 2010.

Terry Leyden said that according to an article by Cliff Taylor in The Irish Times, Mr Trichet had said that “further emergency liquidity . . . would not be provided for the Irish banking system unless Ireland applied for a bailout”.

He added that Central Bank governor Patrick Honohan had, the previous day, “jumped the gun for his own reasons and appeared on Morning Ireland to pressure the government into accepting Mr Trichet’s diktat”.

Mr Leyden said he was with Mr Lenihan when Prof Honohan rang from Frankfurt demanding that a Cabinet meeting be called.

“Brian Lenihan was making a last-ditch attempt to burn the bondholders, but that was refused by Mr Trichet who had previously indicated that he would give some concession,” he added.

Mr Leydon said the government was pushed into the bailout. “History will show what really happened,” he added. “Some 58 members of the Fianna Fáil parliamentary party lost their seats as a result of those events.”

Paschal Mooney (FF) said very serious and important questions had been raised about the role of the ECB at a time when the country was facing economic collapse.

“I am sure the public will interpret the letter in such a way as to suggest that Brian Lenihan had little choice but to bow to what I can only describe as the bullying of the president of the ECB,” Mr Mooney added.