It’s time for Gerry Adams to bow out, and take his fictional counterpart with him

Opinion: Sinn Féin is now a significant, and in many ways constructive, part of the democratic process 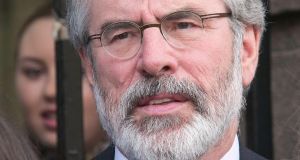 Gerry Adams has had ample opportunity to end this corrosive fiction. There is now little hope that he will ever do so. He should withdraw gracefully and take Joe McGuigan with him. Photograph: Gareth Chaney/Collins

One of the main political leaders in Ireland is Joe McGuigan. In March 1972, when Gerry Adams was arrested and interrogated at Palace barracks in Belfast, he insisted that it was a case of mistaken identity. As he recounted in his autobiography, Before the Dawn, “I had seized upon the device of refusing to admit I was Gerry Adams as a means of combating my interrogation. By continuing to assert that I was Joe McGuigan, I reasoned that I would thwart the interrogation by bogging it down on this issue”.

More than 40 years later, Sinn Féin is still led by a man who refuses to admit he is Gerry Adams. Joe McGuigan is a remarkable man. He may, indeed, be unique. In the maelstrom of west Belfast in the late 1960s and early 1970s, Joe stood out as a young man of infinite patience and pacific resolve. While pretty much every other young man was drawn into some act of affray, Joe, as they might put it Belfast, never done nothing.

As he told Gay Byrne on the old Late Late Show, he not alone did not join the IRA, he never took part in a riot or threw a stone at the police or the army.

This pacifism was all the more remarkable because he came from a family that had, on both sides, long links with the IRA, links that it retained even when the organisation seemed moribund before the Troubles.

From that background, one might have expected Joe McGuigan to be a bit more like the man who looked and spoke exactly like him, Gerry Adams. Gerry did not have Joe’s Gandhian principles. Gerry not only joined the IRA but quickly became, in effect, its commander in Belfast.

This was not a secret. Gerry appeared in his beret as part of the guard of honour at IRA funerals. He wrote articles about IRA strategy when he was interned in Long Kesh. He was such an important figure that when, in July 1972, the IRA met the British government’s Northern Ireland secretary Willie Whitelaw for secret talks, it did so only on the precondition that Gerry Adams be released from Long Kesh to take part. He continued to defend the “legitimacy” of the IRA’s violence over the next three decades.

Gerry Adams, unlike the strangely passive Joe McGuigan, is a complex, genuinely enigmatic figure. No one really doubts that he did hideous things: he was a leading figure in an organisation whose sole purpose was to kill people.

Equally, almost no one doubts that he showed remarkable political skill and personal courage both in recognising the futility of these murders and in getting the IRA to stop. And when he was in the process of executing that highly delicate manoeuvre, many people were prepared to accept Joe McGuigan as a necessary fiction, a way to “thwart the interrogation” of a past that needed to remain, at that time, unspoken.

Temporary convenience
But the fiction was also understood as a temporary convenience. Adams himself, in Before the Dawn, published in 1996, made it clear that much of his own story was indeed a fiction: the book has an explicitly fictional chapter – the only one that deals with his experience as a gunman preparing an ambush. (“It might or might not be right to kill, but sometimes it was necessary.”) In the preface to the book, he seemed to suggest that he would tell the true story later: “I am necessarily constrained . . . the participants in any conflict cannot tell the entire story until some time after that conflict is fully resolved.”

Fifteen years after the Belfast Agreement is surely time enough for the “entire story” that Adams implicitly promised to be told. But he won’t tell it. He is still Joe McGuigan and one of our main political parties is still led by a fictional character.

Does this matter? It matters a great deal, on both sides of the Border. In the North, Adams’s stubborn fictions make impossible something that Sinn Féin itself repeatedly and rightly demands – a proper accounting by all the actors in the conflict for the deaths they inflicted.

That accounting simply can’t happen while a key political force is led by a man who refuses even to admit that he is Gerry Adams.

It matters in the South too. Sinn Féin is now a highly significant, and in many ways constructive part of the democratic process. That process desperately needs a radical renewal based on accountability, honesty and morality. It can’t function if those demands apply to everyone except the leader of a party that insists on holding everyone else to account while maintaining a cult-like adherence to an obvious lie.

Gerry Adams has had ample opportunity to end this corrosive fiction. There is now little hope that he will ever do so. He should withdraw gracefully and take Joe McGuigan with him.