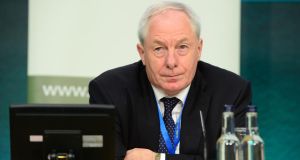 Introducing the Sport Ireland Bill, Minister of State for Sport Michael Ring said the new body would continue to promote, develop and co-ordinate sport in Ireland and would also carry on with the development of the National Sports Campus at Abbotstown.

This included €11.5 million in additional funding for the sports capital programme and €13 million for the indoor arena at the National Sports Campus.

He said he would “try to ensure we can get another round of the sports capital grant, although it will not be easy”.

He said sport was not about elite athletes but about participation. “It is about giving young boys and girls the opportunity to participate in sport in this country and the chance to use even basic facilities in every corner of the country.”

He said €31 million had been allocated under the 2012 round of the sports capital programme, the first round since 2008. Some 2,036 applications were received in 2014 and €40.5 million was allocated with 821 sports clubs benefiting along with 59 regional or national projects.

Paying tribute to the two amalgamating organisations, he said that Irish elite athletes were now “happy to base themselves at home because they are supported by a world-class and distinctly Irish system at the National Sports Campus. This is a major departure from the days when athletes chose to leave our shores if they wanted a real chance of succeeding at the top level internationally.”

Fianna Fáil spokesman Timmy Dooley said his party would support the Bill although there was “nothing particularly exciting or new in it”.

He said there was no real saving to be made as a result of the decision to amalgamate and the Minister had yet to outline the costs associated with the legislation. He believed the cost of this merger could be better utilised in investment in community and high-performance sports provision.

Mr Dooley, however, rejected a section of the Bill allowing for the appointment of consultants and advisers. “The Government should have learnt from its escapade in the establishment of Irish Water,” he said. The Government, he added, led everybody to believe that by establishing Irish Water through An Bord Gáis “very significant savings could be made”.

Sinn Féin spokeswoman Sandra McLellan said her party broadly supported the Bill and was “happy to see the guarantee in this Bill that no jobs will be lost in this case”.

She commended the Government for its sports capital programme and said successive programmes had been a lifeblood for many clubs and organisations. But she expressed concern that some €53 million remained “buried under red tape while previous successful applications have yet to draw down funding”.