People have to be persuaded, not lectured, on climate change, Minister tells Eamon Ryan 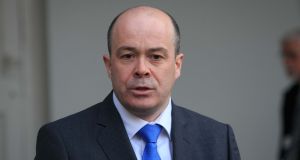 Denis Naughten: “I believe we need to bring people with us.” Photograph: Gareth Chaney/Collins

Minister for Communications, Climate Action and the Environment Denis Naughten has said he is different from former Green Party environment minister Eamon Ryan because he believes in persuading people, not lecturing them about climate change.

He told the Dáil: “We have had lectures for the past 10, 15 or 20 years on climate change, and we are not making the required progress.”

He said that, in the US, the results could be seen of what happens when people’s livelihoods are threatened, “who has been elected and the impact on the global agenda which will reverberate across the globe unless we get serious about climate”.

Responding to Mr Ryan at the end of a debate on climate action, Mr Naughten said the Government and he were committed to putting in place plans that will ensure a transition to a low-carbon, climate-resilient and environmentally sustainable economy by 2050.

“This is just 396 months away,” he said. “It is disappointing that as a Minister who has only been in office for six months, I am lectured by some people about inaction. I am different from the former minister, Deputy Eamon Ryan, and many environmentalists, in that I believe we need to bring people with us.”

He agreed with most of what Mr Ryan said, but believed a decision had been made that there was only one solution to the provision of renewable energy, namely large-scale wind farms in the midlands.

“I want a complete review of our renewable energy policy,” Mr Naughten said. Solar energy and offshore wind energy were part of the solution, but “people need to be realistic”.

The Green Party leader said the Minister was not responsible for the fact that energy and transport emissions went up by 5 per cent in 2015, nor was he responsible for the “lack of courageous ambition” in the entire public administration to create a green equivalent to the radical economic plan of former civil servant TK Whitaker in the 1950s.

However, Mr Ryan said, “we must recognise the reality of where we are. We are one of only two European countries not to meet its targets and we are going radically in the wrong direction”.

He warned that “we cannot continue to burn coal, peat or biomass for power generation”.

Mr Ryan said that “of the energy we use in this country, 16 per cent is wasted completely by waste heat going up chimneys”.

He added: “There nothing on the horizon which shows me that we have the scale of ambition and understanding to grasp what is an economic opportunity for our country.”

He said that “while the State has to lead, we can have business involvement. This is going to have to change everything. It will require enterprise as well as citizen engagement in a national climate dialogue, but it also needs political leadership here.”