Brian Hayes says House’s future a matter for the people 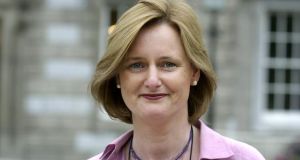 Deirdre Clune: “While the details of any condition can be ironed out, including the obligation to hold an Irish passport, and time limits after which a person living abroad could no longer vote, the concept is very worthwhile.’’ Photograph: Cyril Byrne

Senator Deirdre Clune (Fine Gael) called for the extension of voting rights to emigrants during the resumed debate on the legislation paving the way for a referendum to abolish the Seanad.

“The prospect of giving the vote to emigrants in presidential elections was raised, but that would not be enough,’’ Ms Clune added. “While the details of any condition can be ironed out, including the obligation to hold an Irish passport, and time limits after which a person living abroad could no longer vote, the concept is very worthwhile.’’

The House yesterday passed the second stage of the Thirty-second Amendment of the Constitution (Abolition of Seanad Éireann) Bill and will take the committee stage next week.

Tony Mulcahy (FG) said the suggestion that a significant amount of money would be saved by the Seanad’s abolition was not true. “A figure of €21 million has been knocked around but salaries for the Seanad come to €6 million while Seanad staff will be redeployed.’’

He said that while he had no problem voting for the legislation, he would not be canvassing for a Yes vote. “For the first time, I will declare how I will vote before I enter the polling booth.’’

Brian Ó Domhnaill (FF) said the real crux of the issue was the attack on democracy under the Government’s watch. Taoiseach Enda Kenny had engaged in a “finger-licking exercise” to see what way the wind was blowing before announcing his proposal to abolish the Seanad, he added.

Forum for discourse
Martin Conway (FG) said the Seanad provided a wonderful forum for discourse and debate that did not happen in the Dáil. “The 60 Senators here punch way above their weight as compared to the 166 TDs,’’ he added. He said that the Irish people were a discerning electorate and they would see the proposal to abolish the Seanad as “a small short-term gain’’ and would vote to retain it because of the long-term strategic benefit to Ireland.

James Heffernan (Lab) said the Government had taken a wrecking ball to the sum of democracy. Town councils were being done away with altogether. He said the referendum was a personal solo-run by Mr Kenny against the Seanad, “It is amazing that the Taoiseach, the longest serving member of the Oireachtas, has been here nearly 40 years and suddenly this light switch has gone off in his head.’’

Diarmuid Wilson (FF) accused the Government of engaging in a political stunt and not giving enough time to have the matter discussed. “Ironically, we are supposed to be doing all of this in the name of political reform.’’

Minister of State for Finance Brian Hayes said the commitment to have a referendum was supported by Fianna Fáil and Sinn Féin during the general election campaign. The Irish people were sovereign on the issue, he added.